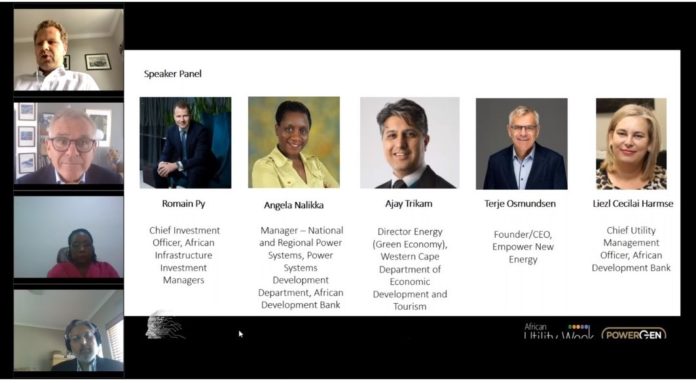 The opening keynote session of the live series of webinars took place on Monday, 11 May 2020.

Kicking-off the Virtual AUW event, Nalikka noted that post-COVID, countries will be seeking self-sufficiency, adding that growth in industrialisation and mining is expected.

However, public resources are constrained and fiscal space is limited, but infrastructure investments are vital, she noted.

Nalikka highlighted: “The private sector will therefore be seen as an alternative and additional source of funding to meet the gap. Most importantly, I expect a second wave of sector reforms, including utility transformation for efficiency, private sector participation in transmission, more PPPs in generation and there will be a ramping up of access programmes including off-grid and mini-grid in rural areas.”

Weighing in on the conversation, Osmundsen said: “During a time when African businesses more than ever need to increase production and have access to competitive energy, we find that the average electricity prices paid by businesses in Africa, are 30-50% higher than the world average.

According to Osmundsen, in the markets of 10 countries, Ghana, Nigeria, Guinea, Sierra Leone, Benin, Senegal, Kenya, Uganda, Ivory Coast and DRC, businesses can save between 15% and 50% of their daytime electricity costs by moving to solar PV.

Osmundsen continued: “So there is huge potential to energise African businesses with solar. But are the businesses allowed to do this? It is surprising to discover that there are only a few countries in Africa that actually allow which is normal in other markets, which is the right of a company to buy electricity from a captive generation plant via a PPA.”

Trikam, added: “In private sector participation in projects programmes in the Western Cape that we have had over the last couple of years, our emerging vision is one of energy resilience with four different angles. One is security of supply, given that we have been in a loadshedding environment in South Africa.

“But also to look at how we can encourage efficiency, specifically in the carbon reduction space and the associated costs of energy which keep escalating. The third is how to drive investment across the whole energy value chain and seek local manufacturing and employment – a key element of economic growth.

“And then the last one is to build resilience, not only in energy, but also in associated infrastructure such as advancing distributed generation models and alternative energy provision. So, the aim is to get to a point where energy in the Western Cape is affordable, accessible, sustainable and low carbon.”