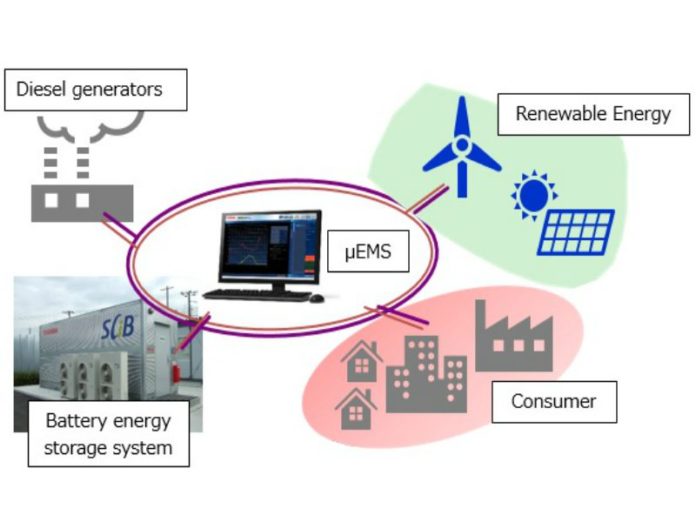 Kawasaki, Japan — Toshiba Energy Systems & Solutions Corporation (hereinafter referred to as Toshiba ESS) today announced that they have won an order to supply the Micro Grid Energy Management System (μEMS) to “Preparing Outer Islands for Sustainable Energy Development (POISED) Project” in the Republic of Maldives from Nishizawa Limited, a Japanese general trading company. The system will start operation in Hithadhoo Island of Addu Atoll in 2020.

Almost all of the Maldives’s current power generation capacity is from diesel generators. The government of the country, which faces a crisis of rising sea levels due to global warming, is promoting the introduction of solar power systems to realize a low carbon society and to reduce the fuel cost for power generation. As one of the promotion, the government has already installed solar power systems in the Hithadhoo Island in 2017. Since the island has an independent power grid, μEMS that maintains a balance between the supply and demand of power including solar power is necessary for the island to operate the solar power systems more efficiently.

The system, comprised of an energy management system and battery energy storage system (BESS), offers the ability to predict the amount of power demand and supply using weather forecasts and helps realize an optimal operation plan for diesel generators. In addition, by optimally controlling the output fluctuation of the solar power systems with BESS, it contributes to the reduction of CO2 emissions by reducing the fuel consumption of diesel generators. Toshiba ESS’s BESS has adopted Toshiba’s SCiB™ Rechargeable Battery, which boasts superior features, including safety and long battery life.
T. T. Network Infrastructure Japan Corporation* had confirmed in the feasibility study that the system would be economically rational for the Maldives.

“As a global leading supplier of integrated energy solutions, I’m confident that we will contribute to Maldives’s clean and stable power supply using knowledge cultivated in our long experience as the leader in supervisory control systems in the Japanese market and other countries,” said Hideki Saito, Vice President of the Transmission & Distribution Systems Div. at Toshiba ESS.

This is the first project using the fund of Joint Crediting Mechanism established by Ministry of the Environment of Japan, which is an initiative to cooperate with developing countries for reducing greenhouse gas emissions. This is also a part of the project (POISED which is funded by the Asian Development Bank, European Investment Bank, JFJCM and Government of the Maldives), promoting a hybrid system of solar power generation and diesel generation in the Maldives.

Toshiba ESS has a record of supplying μEMS for the Okinawa Electric Power Company, contributing to an efficient operation of diesel generators, and increasing the use of renewable energy. Toshiba ESS is also known for delivering a micro grid system for a project in the state of New Mexico in the United States.

It is expected that the need for micro grid systems grows in islands and off-grid areas, which will increase renewable energy to the energy mix and reduce CO2 emissions. Toshiba ESS will continue to contribute to creating a low-carbon society through its high quality systems and solutions.

For further information about our Transmission and distribution business, please check here.