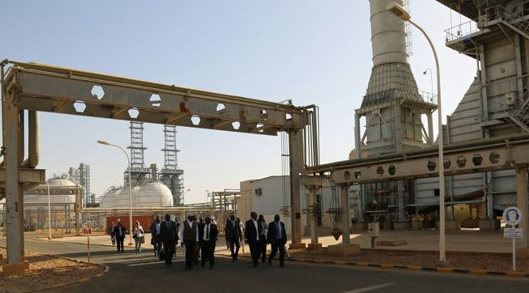 According to the AfDB, Adesina went to the north African country to hold discussions with the government regarding Sudan’s planned power interconnection project that is to boost electricity supply in the country by 3,750MW.

On his trip, Adesina was joined by the executive director, Kwabena Boadu Oku-Afari, representing Sudan at the AfDB; the Bank’s director general for East Africa, Gabriel Negatu; and the country manager for Sudan, Abdul Kamara.

The project, which is budgeted to cost $566 million, is envisaged to promote the economic development of both Sudan and Ethiopia.

There is an additional cost of $350 million required to develop a Khartoum power ring of 500kV.

The AfDB President toured the power station and held a meeting with its management while accompanied by Mustapha Holi, under-secretary of planning, and Abdalla Ali Ibrahim, under-secretary of international cooperation, both of the ministry of finance and economic planning.

The Garri Power Station, which was established in 1960, has a generation capacity of 1,745MW and uses hydropower to generate 40% of its electricity supply, while the rest is through thermal power.

An additional thermal project with a capacity of 3,750MW is planned for execution in the next five years.

The AfDB revealed that other power projects include the Port Sudan hydro plant with a capacity of 1,500MW, whose phase one was supported by the Arab Bank for Economic Development in Africa.

The government is sourcing funds to support phase two of this project, while the feasibility study of the project is ongoing.

The meeting also highlighted the planned rural electrification programme, which aims to install 1.1 million 50 to 200 watt solar home systems during the period 2015-2030. The project is expected to benefit 5.5 million people.