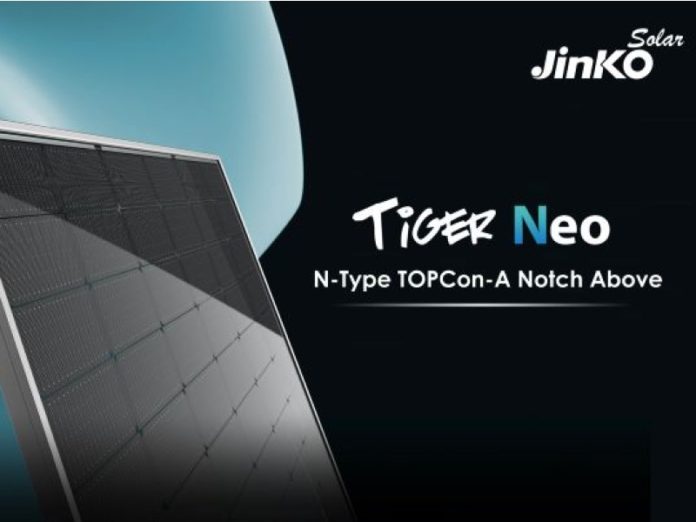 A boost to the solar module industry comes as JinkoSolar launches its next-generation N-type TOPCon module called Tiger Neo. The module delivers a much higher efficiency along with other features the company was anticipating.

During the launch event held on 2 November in Shanghai, the company updated the key performance metrics of this new module.

On top of the previously reported efficiency changes of up to 22.3% and maximum 620W output based on 182 wafer, Tiger Neo is equipped with a new performance package that improves on JinkoSolar’s already industry-leading module efficiency and reliability, resulting in much lower LCOE and IRR.

The company detailed the characteristics of Tiger Neo and laid out a roadmap for PERC successors in the form of TOPCon technology.

Beyond PERC, N-type represents a further evolution, extending its performance and efficiency resulting in a LOCE that is a further 3-6% lower on average. With a 10GW level volume production, Tiger Neo leads the industry mainstream to start to move from PERC to TOPCon.

The benefits of the N-type Tiger Neo module

According to Dany Qian, VP of JinkoSolar, the current yield rate of Tiger Neo in mass production is progressing ahead of PERC, and extends to additional efficiency gains and power enhancement over PERC.

She also explained during a launch interview why the mono-PERC mainstream landscape of c-Si production in 2021 will be short-lived while HJT is struggling with yield rates and cost. One of the key metrics on how well a cell process is developing is looking at its quantitative yield or rather, its defect rate.

JinkoSolar’s TOPCon yield rate is ahead of its counterparts and the expectation is that this will increase as high volume manufacturing ramps into next year, states Qian.

“This level of manufacturing positions JinkoSolar at the forefront of N-type mass production and the first phase of the 10GW-level capacity release will accelerate N-type to become mainstream offerings and pull the industry back to the fundamental properties of the substrate type and cell process flow.

“It is sticking with the TOPCon roadmap and relying on combined innovative features that enable JinkoSolar to achieve the full-node scaling that Tiger Neo promises to bring.”

Have you watched this?
Webinar recording: Energy storage solutions for C&I market in sub-Saharan Africa

Jinko Solarhttp://www.jinkosolar.com%20
JinkoSolar (NYSE: JKS) is one of the largest and most innovative solar module manufacturers in the world. JinkoSolar distributes its solar products and sells its solutions and services to a diversified international utility, commercial and residential customer base in China, the United States, Japan, Germany, the United Kingdom, Chile, South Africa, India, Mexico, Brazil, the United Arab Emirates, Italy, Spain, France, Belgium, and other countries and regions. JinkoSolar has built a vertically integrated solar product value chain, with an integrated annual capacity of 10.5 GW for silicon wafers, 7.0 GW for solar cells, and 11.0 GW for solar modules, as of March 31, 2019.