SARPA, which was established in September 1997 in South Africa, fully supports Minister of Mineral Resources and Energy (DMRE) Gwede Mantashe’s announcement about the plan to soon commence with the procurement of the 2,500MW of nuclear power.

Implementation of this plan will ensure the security of energy supply, which South Africa is in desperate need of, states SARPA. Procurement is the next step of implementing provisions in the Integrated Resource Plan (IRP2019), which aims at responding to challenges faced within the energy sector.

The practical implementation of the aforesaid announcement will certainly address potential electricity supply challenges in the long term, including the present power outages, states the Association. The announcement was made during the briefing of parliament’s mineral resources and energy portfolio oversight committee on Thursday afternoon, 07 May 2020.

“As SARPA we believe the announcement could not have come at a better time than now as the country has in recent time witnessed unending energy supply challenges leading to loadshedding, which affected business operations and households alike,” the statement read.

The electricity shortage challenges can be dated as back as 2007, and according to Eskom’s website, 77% of electric power is currently generated from the coal-fired power plants, 5% from the Koeberg nuclear power plant and 18% from the renewable energy sources.

The existing electricity supply challenges are not unexpected because some of the baseload coal-fired power plants have reached the end of their operational lifespan, SARPA explained. More will follow suit within the next ten years, with the exception of a few such as Kusile and Medupi coal-fired power plants.

“It, therefore, follows that procurement and subsequent construction of nuclear power plants will ensure the security of energy supply from the year 2030 and beyond. We acknowledge and embrace the principle of the energy mix ‘diversification’ provision in the IRP2019; and believe nuclear power will provide a reliable baseload electricity supply with much less carbon footprint compared to coal-fired power plants.”

According to SARPA, renewable sources of energy such as solar and wind are equally important, but their intermittent nature and storage limitations hinder large scale baseload power production from these sources, therefore not always available for use when needed.

“It goes without saying that the planned procurement of nuclear power plants will create much-needed employment opportunities, not just within the nuclear industry itself but also in the support industries as well. This will, in turn, improve the South African economy. To underscore the employment potential, the existing nuclear industries such as Necsa and Eskom Koeberg are currently safely operating nuclear facilities with more than thousands employees.”

“It is also testimony to the training and capabilities of nuclear professionals that operate these facilities. The generated high-level of radioactive waste is safely stored in the reactor pool, while the low to intermediate radioactive waste is disposed at the National Radioactive Waste Disposal Institute (NRWDI).”

South Africa has a well-established National Nuclear Regulator (NNR), which is a national authority responsible for exercising regulatory control over the safety of nuclear installations, radioactive waste, irradiated nuclear fuel, and the mining and processing of radioactive ores and minerals.

The NNR is primarily responsible for protecting persons, property and the environment from the harmful effects arising from exposure to ionizing radiation; ensure safe operation at nuclear industries thereby enforcing compliance to the regulations.

It is against this backdrop of an already well established and internationally recognised nuclear industry that SARPA believes that the country can successfully procure and run a few more nuclear power reactors. 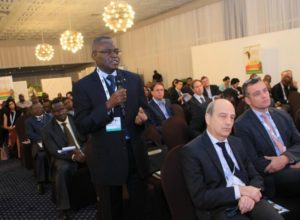 Key investors and African utilities brought in to enhance the energy...