Everyone knows that the disastrous Medupi and Kusile projects, along with the corruption in the coal procurement, caused the crisis that is now unfolding at Eskom.

Eskom, South Africa’s state-owned power utility, was an icon for the country in 2001 as the award of the International Utility of the Year showed. It had the lowest cost of electricity and virtually the highest power station availability in the world. This stellar organisation has been brought down by the corruption and bad contracts of the Zuma years, or was that the real cause?

If the current belief is true then one must assume the Zuma and related corruption was very fast acting, or has everyone forgotten the loadshedding at the end of 2007 and into early 2008. Also, Eskom’s urgent application to NERSA in early 2008 for a 65% tariff hike – or “Eskom would not be able to function”. This was followed by an MYPD2 three year application to NERSA in 2009 of 45% increase for each of the three years. In early 2009, Eskom management were told that there may be no money to pay wages from March 2009.

The real truth is that the Eskom crisis is much longer in the making than everyone appears to think.  The utility industry has extremely lengthy long-term planning time lines. A decision to build a new power station (following a national policy formulation) will only lead to a first unit startup in about 10 years, and it will last as a massive asset that will impact the national economy for 50+ years after that.

The current Eskom crisis has its roots in decisions made by P W Botha in 1989 to form the Office of Public Enterprises. This was set up to privatise the state-owned enterprises in line with Margret Thatcher’s free market policy, which was fashionable at the time.  Eskom was transferred from the then Department of Mineral and Energy Affairs to the OPE (later the DPE) along with other SOEs and any serious consideration of new construction (beyond what was in build) was put on hold. This was not a major issue at the time as Eskom had seen a reduction of growth to about 3% per year from the hectic 10% per year before 1982. Given the lead time of construction, Eskom was set to massively overshoot the needs of the country and would not need new plant development for at least 10 years.

This privatisation policy (or deregulation) was aimed to bring IPPs into a new competitive market, with Eskom looking at a steadily shrinking market share.  While there were clearly massive political changes from 1989 to 1998 the basic electricity policy was kept intact and the 1998 energy policy, along with a Cabinet decision that Eskom would not build any more power plants, entrenched this.  Meanwhile, electricity demand was growing at a reasonably consistent 3.4% per year from 1982 to 2007, and Eskom’s tariff kept falling in real terms up to 2005, while Eskom paid off all the debt that it had incurred in the massive 1970s to 1990s construction programme.

In the mid-1990s, Eskom pointed out to the policymakers that given the load growth there would be need for new capacity by 2007 (as is documented in the 1998 energy policy). The policymakers looked to free market IPPs to fill this gap, with the intention that they would have supply contracts with end-users (such as large industrial customers and the municipalities). They would then apply for a license from NERSA and get a wheeling charge through Eskom’s transmission system. However no such contracts where generated and no such license applications were made as Eskom’s costs were just too low to compete with, and no single generator could really offer a secure supply. There were many requests by IPPs to have long-term contracts to supply Eskom itself, but all were much higher than the actual tariff Eskom sold at, so none were built.

In 2004, the new Minister of Public Enterprises (Alex Erwin) asked Eskom if the 2007 deadline for new power stations was still valid.  Eskom confirmed it was. The simplistic projection of the growth rate of the previous 20 years indicated there would be a peak demand by 2016 in the order of 50,000MW, compared to some 34,000MW in 2004. The Minister took about three months to get a Cabinet resolution in October 2004 that Eskom should build the power stations to meet the country’s needs.

This is when the rush to build what would become Medupi and Kusile began, but there had been no preparation work. In fact Eskom had closed down its central engineering group, which had led the build programme in the 1970s onwards, in 1992. Eskom had slimmed down from over 65,000 employees in the mid-1980s to below 30,000 by the 2000s. Eskom’s tariff was, by 2004, essentially just covering the operating, maintenance, and fuel costs.  For several years NERSA (and before that NER) had given Eskom about 60% of the increase it felt it needed.

With the new stations that Eskom had from the 1980s and 1990s there was a tendency to defer maintenance. Virtually all major plant upgrades had been stopped due to the very low tariff. An example is that in 2000 Eskom planners asked for a very small budget to get a Bill of Materials developed for a future 6-pack coal station in case there was a need to build one. This was turned down by the Board as there was no mandate for Eskom to consider new plants.

Eskom rushed into the building programme with Medupi and Kusile, with plans for Coal-3 and Coal-4 along with Nuclear-1 et al to meet the long-term projection, with no funding plan to meet it. Then the capacity crunch hit at the end of 2007 (as predicted in the 1990s), stifling any industrial growth in the country. By the end of 2008 the financial pressures on Eskom (whose budget was still largely based on the running costs of relatively new power stations) all plans beyond Medupi and Kusile (and Ingula) were put on ice. The organisational growth that had gone with the plans to meet the national need (doubling the size of Eskom capacity) still continued, due to the inertia of the system and the belief by many managers that Eskom would have to grow to meet the national need.

Eskom has been in crisis mode from 2008 to the present day. With not enough money and insufficient power plants every rule was bent to “Keep the Lights On”. In this environment many used the new flexibility to fix problems very quickly, but some used it for nefarious purposes.

As I left Eskom after 34 years of service in December 2018, I look back with sadness at what the last three decades of policy have done to the company, and through that to the country’s economy. I strongly believe that the chaos of the policy induced crisis led to the corruption, not the other way round.

David Nicholls retired from Eskom in December 2018 as the Chief Nuclear Officer after 34 years with the company. He served as the Chairman of the IAEA Technical Working Group on Advanced Light Water Reactors from 2010-2017 and is currently the Co-Chairman of the IAEA Technical Working Group on Nuclear Power Plant Operations. Prior to joining Eskom he was an engineer officer in the UK Royal Navy, serving on nuclear submarines. 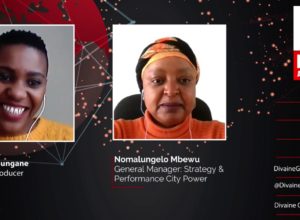