Of all the fossil fuels, coal is the dirtiest in terms of air pollution and carbon emissions. Eskom’s reliance on a fleet of ageing coal-fired power stations makes them the country’s biggest polluter.

Apart from the obvious dangers of carbon emissions, one also needs to consider the associated health and environmental costs plus the costs to local communities in the form of reduced tourism and property values.

If the politicians and labour union leaders were truly honest with themselves, they would acknowledge that a coal-fired country is not in the best interest of the people and certainly not sustainable. The noose is closing in. The World Bank, along with local and global commercial banks simply will not finance any coal related projects. Read more: Global financiers fleeing the coal sector, finds report

Extreme weather events are now a common occurrence. At the beginning of the year, the State of Victoria in Australia found its energy grid ‘not fit for purpose’ in a climate increasingly prone to extreme heat. More than 200,000 people had their power cut when Melbourne’s temperature hit 42 degrees. The generation failure came from ageing coal and gas generators underlining the urgent need to shift to renewables.

The key challenge is no longer cost. Wind and solar technologies are now accepted as the cheapest energy production in the world with the value add of zero carbon emissions costs. The challenge is job preservation in the transition out of coal. The coal mining industry accounts for 81 000 direct jobs, and an estimated 170 000 indirect jobs. Eskom employs roughly 47000 people, a third of which is in coal-fired generation.

While the concerns of labour unions NUM and NUMSA are justifiable, we have no choice; we have to shift from our current high-carbon energy system to a future low-carbon electricity system.

We have an abundance of natural resources; gas, sunshine and wind which can be used to generate power with an inclusive advantage of jobs transfer from the coal industry. The secondary and third tier industrial development associated with renewables can replace coal sector industries in order to meet the countries investment and development goals. Jobs do not necessarily have to be lost; instead more jobs can be created over a wider geographical reach.

Evidence from UCT’s 2015 ERC research indicates that the electricity system will be the easiest part of our economy to decarbonise, followed by other sectors such as transport and the industrial sector. China, India, Germany and other major developing countries are investing heavily in renewable energy, as well as in other low-carbon technologies.

Despite the obvious, politicians, Eskom and labour unions NUM and NUMSA continue to dig in. Their justification that ‘coal is here to stay’ in order to preserve jobs is short-sighted. The truth is there will not be any jobs for anyone if we continue to emit carbon emissions at the current levels.

One almost gets the impression that our Energy Minister, the Eskom Board plus the leaders of labour unions NUM and NUMSA do not believe in climate change and the associated timelines associated with its social- economic impact. They continue to dig in their heels with the rhetoric ‘coal is here to stay’. The truth is there will not be any jobs for anyone if we continue to emit carbon emissions at the current levels.

Perhaps a quick read of ‘The Uninhabitable Earth’ by David Wallace-Wells may do the trick. The effects of climate change are, as he puts it in the book’s first line, ‘worse, and much worse than you think.’

Coal-fired energy production on nearly all accounts is on its last legs.  Globally and locally there is a trove of reports that reveal just how much public opinion has swung in favour of renewables. As a country, we need to move with the times if we have any chance of saving our planet.

If anyone is in any doubt, try to see the future of life in South Africa through the eyes of your children or grandchildren and then ask the question; will it be the same as mine? 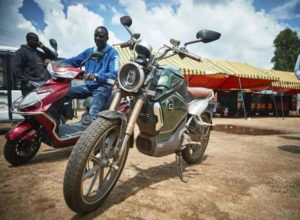