The newswires and social media have not disappointed on the topic of South Africa’s new nuclear build programme rising out of the ashes once again.

We knew it was coming, and yet the formal request for information took some by surprise.

On Twitter, Professor Anton Eberhard asked: “None of South Africa’s IRP electricity plans have had nuclear power in the least-cost mix; it has been forced in as a “policy adjustment”. In a fiscally constrained post-COVID environment the question has to be asked: what is energy minister @GwedeMantashe1 up to?”

While Earth Life Africa JHB pointed out: “Nuclear is the most expensive energy alternative for SA. The government is considering SMRs to be part of a soon initiated nuclear programme. SMRs may be more “affordable” but this does not translate to being “cost-effective”. This may still be an expensive option for SA.”

Since the call is in line with the IRP2019 Decision 8 – which states that the Department of Mineral Resources and Energy (DMRE) will “commence preparations for a nuclear build programme at a pace and scale that the country can afford” – there is no reason to delay gathering information to test the market.

In fact, the DMRE has stressed that this is not a competitive tender, and the information provided by participants will not be used as a basis for awarding a contract or order.

Why then is there a storm brewing around the possibility of adding 2,500MW of nuclear energy capacity to South Africa’s energy mix?

The main concerns include affordability of construction, governance issues – thanks to the country’s Zuma-era new nuclear build corruption fiasco (I won’t rehash the story, which cost South Africa dearly), and safety anxieties of the plant itself and nuclear waste challenges.

Read more:
Op-Ed: RFI is not a licence application for a nuclear installation

On the opposite side, nuclear energy is seen in a different light. This power source is clean, cost-reflective over the long term, a stable baseload, enables job opportunities, and has a lifespan of approximately 40 years with a possible 30-year extension.

According to the president of African Young Generation in Nuclear, Gaopalelwe Santswere: “The nuclear industry in SA employs more than 4,000 professionals across the country with only 1,800MW from Koeberg NPP & 20MW @necsa_Ltd, today 58% of young people are unemployed with R260bn REIPPP Investment failed to create the promised jobs with no localisation at all.”

While a statement from the Southern African Radiation Protection Association stressed the importance of nuclear in the energy mix: “…nuclear power produces reliable baseload electricity with much less carbon footprint compared to fossil-fuel technologies.”

This time, what makes the new build endeavour so interesting is that the IRP2019 has proposed that the programme be implemented at an affordable pace and modular scale as opposed to a fleet approach from yesteryear. The idea is to also take into account technological developments in nuclear power.

What are your concerns, if any, around the possibility of increasing the nuclear power component of South Africa’s energy mix? I also welcome your comments on what modular nuclear technologies you foresee making an entrance in South Africa. 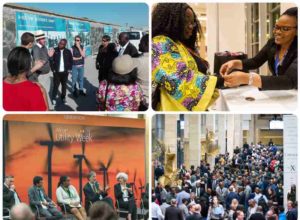