Nuclear reactors are the low-carbon backbone of electricity systems, operating in the background, day in and day out, often out of sight and out of mind. Sounds like the perfect solution to climate change; yet these power plants are losing the popularity battle.

Modern society is dependent on the steady supply of electricity, every day of the year – regardless of weather, season or time of day – and nuclear energy is particularly well suited to providing this service. Capable of generating immense amounts of clean power, nuclear reactors are the silent giants upon which many countries rely daily.

In a World Nuclear Association (WNA) white paper, The Silent Giant: The need for nuclear in a clean energy system, the association says: “In a world centred on short-term fixes, many of the traits that make nuclear energy a key player in the transition to a sustainable world are not properly valued and are often taken for granted.”

The current level of nuclear energy supply avoids more than 2,500 million tonnes of carbon dioxide emissions annually, had the same amount of electricity been generated using fossil fuels. The use of nuclear energy in France and Sweden, for example, has illustrated that it can be the “catalyst for delivering sustainable energy transitions”.

The white paper adds that the use of nuclear energy is the “fast track to a high-powered and clean energy system, which not only delivers a healthier environment and an affordable supply of electricity, but also strengthens energy security and helps mitigate climate change”.

The association says ways must be found to decarbonise all parts of the economy that are sustainable in the long term. Despite efforts made so far, it says the world remains heavily dependent on fossil fuels.

“The trend is clear – instead of reducing our dependence on fossil fuels, we are increasing it. As a direct result, greenhouse gas emissions continue to rise when they need to drastically fall. Given that the majority of baseload supply is fossil-based, an increase in the use of nuclear energy would result in a rapid decarbonisation of the electricity system,” it says.

Working in unison is the best way forward

Renewable energy sources alone are not capable of fully decarbonising the economy, but they can complement nuclear energy in achieving this goal. In its Nuclear Energy in a Clean Energy System report released in early 2019, the International Energy Agency (IEA) concluded that without an expanded contribution from nuclear energy, “the already huge challenge of achieving emissions reductions will become drastically harder and more costly”.

The IEA white paper calls for markets to give due credit to electricity generators, such as nuclear energy, that supply affordable, reliable and always-available power. Markets also fail to recognise the relative costs of different forms of electricity generation.

“Nuclear energy is already making a significant contribution to providing the world with clean and abundant electricity, and has a proven track record of being a reliable workhorse around the world,” it says.

In response to the IEA’s call for action, the WNA, as part of its Harmony Programme, has set a target to build an additional 1,000GWe of reactors across the world before 2050. This will bring the global share of electricity production of nuclear to 25%. In order to realise the full potential of nuclear energy, the association identified three key areas where actions are required:

Expanding on these actions, the WNA explains that a level playing field in energy markets which drives investment in future clean energy is needed. Nuclear energy should be recognised for its reliability and be treated on equal terms along with other low-carbon technologies as part of a robust low-carbon energy mix.

Currently, electricity markets are failing to recognise the full costs and benefits of different forms of electricity generation. Even where carbon pricing is implemented, it does not represent the true long-term costs of climate change. There is no credit given for the reliable, long-term, 24/7 generation supplied by nuclear energy.

In terms of regulation, the market should create harmonised regulatory processes to provide a more internationally consistent, efficient and predictable nuclear licensing regime. This will facilitate growth of nuclear capacity and timely licensing of innovative designs.

The WNA’s Harmony project will also look to create an effective safety paradigm focusing on genuine public wellbeing where the health, environmental and safety benefi ts of nuclear are better understood and valued when compared with other energy sources.

Moving to a sustainable future

The IEA’s recent report on nuclear energy highlighted the importance of dependable baseload electricity generators and the need to properly value and compensate them for the electricity security and reliability services they provide.

Despite recent impressive growth, the stark reality is that renewables alone will not be able to resolve our dependence on fossil fuels. Clearly, the sun does not always shine, and the wind does not always blow, and this is compounded by the fact that many times these periods coincide with when electricity demand is at its highest. However, renewables can be complementary to nuclear energy.

Storage solutions, such as batteries, will not be able to power our societies for days or weeks when the weather is not favourable. Natural gas is currently the most used solution for the intermittency problem, which only serves to reinforce our economy’s dependence on fossil fuels, and severely undermines the apparently ‘green credentials’ of many renewables.

The IEA has concluded that without an expanded contribution from nuclear energy, the already huge challenge of achieving emissions reductions will become drastically harder and more costly. In their report, they also conclude that not using nuclear would have negative implications for energy security and result in higher costs for the consumers.

The IEA recommends policy reforms to “…ensure competition on a level playing fi eld” and that the “… focus should be on designing electricity markets in a way that values the clean energy and energy security attributes of low-carbon technologies, including nuclear power”. Such reforms should also ensure that reliability of electricity production is properly valued and compensated.

There is no significant age-related trend in nuclear reactor performance, since the mean capacity factor for reactors over the last five years shows little variation with age. The median construction time in 2018 was eight-and-a-half years; this was primarily due to the start-up of reactors using new designs. The average construction time for reactors in recent years has been around five-to-six years.

We should see construction times return to more typical recent durations in 2019.

Construction started on the first of four planned units at Akkuyu, in Turkey and the fi rst formal start of construction in West & Central Europe since 2007 began at Hinkley Point C, with fi rst concrete poured for the fi rst of two EPR units.

In Russia preparations on the fi rst fl oating nuclear power plant continued, with both reactors on board the Akademik Lomonosov reaching fi rst criticality. Reactors in the US produced more electricity in 2018 than in any previous year, with 808TWh generated.

One reactor retired, Oyster Creek, despite being licensed for an additional 10 years of operation, due to revised water use rules would require construction of cooling towers.

The world’s nuclear plants continue to perform excellently. Growth is strong, with more than 20 new reactors scheduled to be connected before the end of 2020. ESI 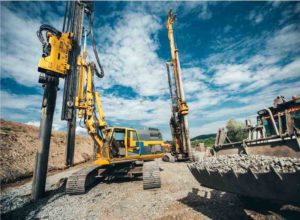 Geologists to conduct scientific drilling in the Bushveld Complex