Mozambique convened a seminar this week to establish the mechanisms that will make the exploitation of natural gas an opportunity to simulate its industrial development.

The seminar is being held in cooperation with Brazil to form allies and draw from the experience.

According to the Mozambique News Agency, the Permanent Secretary in the Ministry of Mineral Resources and Energy, Alfredo Nampete, encouraged Mozambicans to note the business opportunities brought by the gas discoveries.

“While the start of gas production in the Rovuma Basin will place Mozambique on the radar of the world markets, on the other hand the opportunities resulting from these projects bring with them many expectations for all of us”, Nampete noted.

“They form a space where Mozambicans can use their intelligence to take advantage of business opportunities,” he added, stating that those opportunities would result from the high demand to supply goods and services for the gas projects.

Nampete pointed out that the seminar is being held shortly after the investors in Rovuma Basin Offshore Area One, on 18 June, took the Final Investment Decision to develop the Golfinho and Atum gas fields.

Rovuma Basin Offshore Area One involves piping the gas to factories onshore (known as trains) where it will be liquefied, in preparation for export.

A total investment of around $23 billion is expected, making this liquefied natural gas (LNG) project by far the largest investment in Mozambican history. It will make Mozambique the largest producer and exporter of gas in Africa.

Other projects include; a floating LNG project of the Italian energy company ENI in Area Four of the Rovuma Basin, and another project headed by ExxonMobil, for further onshore trains.

The total investment envisaged soars to over $50 billion, with a total production of LNG of over 30 million tonnes a year.

Nampete highlighted that these LNG projects are of capital importance for industrial development – hence the significance of the seminar, which will allow Mozambique to learn from the experience of Brazilian institutions.

“With institutions such as the National Petroleum Agency of Brazil, Petrobras, and the Brazilian Petroleum Institute, with wide-ranging experience in the area, Brazil is certainly one of the countries with whom Mozambique should establish alliances,” Nampete said.

To this end, the Petroleum Law, passed in 2014, includes unequivocal commands on the acquisition of goods and services, establishing the need for an association between Mozambican and foreign concerns to provide those services. 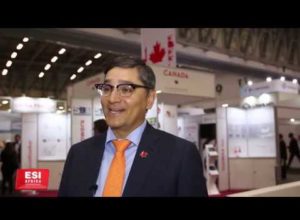