The Zimbabwean government has obtained $12 million through the Zimbabwe Multi-donor Trust Fund, earmarked to pay for equipment required to boost power generation at the Hwange Thermal Power Station.

Last week, the minister of energy and power development, Samuel Undenge, handed over the equipment at the plant, the Herald reported.

It is reported that the minister was also informed about the constraints facing the country’s main thermal power producer.

The Zimbabwe Power Company Hwange Thermal Station manager, Eng Arnold Chiuraise, said the plant was crippled by a shortage of critical spares and raw materials such as coal. Read more…

The manager stated that five of the six units are operational and producing an estimated 560MW against a capacity of 920MW, with Unit 6 undergoing refurbishment.

“We are having challenges sourcing spares for ageing tubes for boilers because of inadequate funding. We have started refurbishing Unit 6 but we are facing challenges of raw materials hence we are currently operating below our recommended stock.

“We are not receiving adequate coal supply from the source such as Hwange Colliery though they have now promised to improve,” Chiuraise said.

It is reported that Minister Undenge said rehabilitation of power infrastructure was a national priority since energy is a key for economic recovery. Read more…

“The project is meant to help improve the reliability of electricity supply to various urban water treatment plants and sewage plants. The capacity to move ash from the boilers to the disposal dams was restricted leading to ash build up hence curtailing generation,” he said.

He added that the Hwange Power station was losing 1,000GW of electricity due to high concentration of ash in the plants.

“Rehabilitation of the ash handling plant has been critical to ensure continuous operation of power generation units at the power station by preventing build-up of ash in the boilers that could lead to a complete shutdown of generating units.

“I am glad that this mobile plant equipment will be used to ensure effective ash dam management and containment of ash dust pollution,” he concluded. 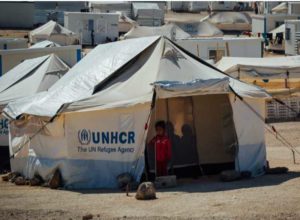 Renewables can change the lives of refugees, states report