After two years of studying the challenges and opportunities associated with climate change, including conducting 1,500 interviews and over 100 site visits across 15 countries, the Center determined that the most viable solution was an extraordinary expansion of nuclear energy.

“Nuclear power isn’t just part of the solution to addressing climate change; it is the solution,” said Kugelmass, the managing director of the Energy Impact Center.”

Foundation for a nuclear power blueprint

The problem is that for the past 50 years, rising costs and delays associated with overly complicated and proprietary designs have severely limited the deployment of nuclear power around the world.

EIC created OPEN100 to serve as a foundation for new power plant construction, offering developers everything from a web interface to visualise plant and component design, costs studies, and construction plans.

The open-source format will allow start-ups, engineering firms, global utilities, and capital markets to align around a common framework.

“The goal of the project is to accelerate the development of nuclear power, offering the world an affordable alternative to fossil fuels,” Kugelmass said.

The funding round was led by Silicon Valley’s First Round Capital. 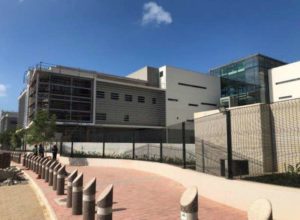 Fast-track construction of S.African hospital in response to COVID-19