In October, South Africa’s much-delayed Integrated Resource Plan (IRP) was approved by Cabinet. As expected, comment has been varied, responses vehement and opinions divided. There were no huge surprises and organisations are already talking about what they want changed in the next plan.

The IRP2019 supports a diverse energy mix and sets out nine policy interventions to ensure the security of South Africa’s electricity supply industry. Minister of Mineral Resources and Energy Gwede Mantashe introduced the plan as Eskom reintroduced the country to loadshedding, which is tacitly acknowledged in the IRP’s first policy position to “immediately initiate a medium-term power purchase programme to assist with creating reserve capacity needed to complement Eskom’s declining plant performance and reduce the utilisation of diesel generators”.

Africa Energy Corporation CEO Silas Zimu said a medium-term power purchase programme to address short-term supply and demand side interventions could probably be addressed by independent producers already operating in the country: “There are IPPs who have more installed capacity than what they currently put into the grid; they should be allowed to do so.”

Head of energy and electricity at the South African Local Government Association (SALGA) Nhlanhla Ngidi says municipalities are keen to engage with SSEG, which they used to see as a threat to business but now view as an opportunity to review business models and introduce new offerings into the mix. “Quite a lot of municipalities are ready, and some are already doing it and have introduced tariffs for embedded generation. We are continuously capacitating them with our strategic partners, training municipal officials on administration and registration, financial modelling, and the legal and technical parts of engaging with small scale embedded generation,” said Ngidi.

Strategies are being developed to create sustainable service delivery business models that respond to technological advances in the sector and there are pilot projects being run in various municipalities, tracking aspects such as the integration of renewables on the network and introducing new and integrated energy packages for low income customers.

Though the IRP2019 emphasises the concept of an energy mix, coal remains important: “While coal’s installed capacity will be lower than the current installed base, it will remain the dominant energy supply, contributing 59% of the energy volumes required to meet demand. Nuclear will contribute 5%; hydro 8%; photovoltaic 6%; wind 18%; gas and storage 2%.”

The plan sets a timeframe for decommissioning coal plants at the end of their shelf life – even as it stresses new investments must be directed towards efficient coal technologies, underground coal gasification, and the development of Carbon Capture and Storage for new coal plants that must be brought online. And all this while trying to help Eskom comply with the Minimum Emission Standards, which it has admitted it will not meet.

Jules Schers, international technical expert with the Energy Systems Research Group at the University of Cape Town, calls committing to additional coal problematic: “Considering the fair risk that Eskom’s existing plants will not be available at levels optimistically predicted, as well as the risk that the new coal plants may be delayed or cancelled, we might depend on diesel turbines longer than we wish.”

Moreover, before anything of the IRP comes on-stream, loadshedding remains very likely and generation costs will escalate to pay for running expensive diesel-powered open-cycle gas turbines at high load factors. Enhanced demand-side options, including energy efficiency, have unfortunately been left out of consideration. Also, to have flexibility in the future and to get gas plants online by 2023/4, gas infrastructure procurement processes should be started urgently,” said Schers

Gas in the pipeline

When it comes to gas the plan indicates a requirement for 1,000MW by 2023 and 2,000MW by 2027, but this represents a low gas utilisation, “which does not likely justify the development of new gas infrastructure and power plants predicated on such sub-optimal volumes of gas. Consideration must therefore be given to the conversion of the diesel-powered peakers [emergency power plants] on the east coast of South Africa,” according to the IRP2019.

Zimu says local companies “including the peakers” are ready and eager for this process of conversion to begin: “With the shortages due to loadshedding they are currently running, and they would be easier to convert to be able to use gas – they are strategically positioned. What would be fair is an open tender. There could also be other people who might have solutions that are better for the peakers. That is the next step.”

The Government Gazette’s initial posting of the incorrect version of the IRP gave an inadvertent insight into government’s view on the Inga hydropower project. At one point the document mentions no new nuclear energy will be procured during the IRP2019 period; however, at another point it says government would “immediately commence the nuclear build programme to the extent of 2,500MW… in case the Inga hydropower project does not materialise”.

It was supposed to read that government would “commence preparation for a nuclear-build programme to the extent of 2,500MW at a pace and scale that the country can afford because it is a no-regret option in the long term”. Notwithstanding the commitment to develop strategic power projects in neighbouring countries that enable the development of cross-border transmission infrastructure, government is hedging its bets on whether the proposed hydropower project on the Congo River will happen in its current guise.

More importantly though, nuclear power not only remains on the cards because the Koeberg nuclear power plant has been given a lifeline of another 20 years instead of its original planned decommission at the end of its design life in 2024, the plan is also to bring more online. While Ngidi has concerns about the addition of nuclear capacity, he accepts the country’s need for a more reliable and clean baseload as more intermittent generation is introduced into the system: “Maybe investing more on research for battery storage as baseload in the near future would be more beneficial than to go for the very expensive nuclear. We hope that the government will keep to its word on implementing the nuclear addition at a pace that will be affordable to the country.”

Zimu warns though that local companies should be proactive about the nuclear process and not allow South Africa to become a dumping ground for old technology: “We have good institutions that can partner with foreign companies to bring in new technologies. There has to be local content and manufacturing.”

Schers acknowledged that it is good news that government has finalised the IRP, which “sets the country on a course towards a more sustainable electricity system in the medium term” but he doesn’t think the plan sufficiently addresses the country’s challenges of poverty, job creation, or reducing greenhouse gas emission and air and water pollution.

“It chooses the more expensive and risky ‘policy-adjusted’ option by imposing artificial limits on investment in renewable energy and thus puts a brake on economic growth and job creation,” said Schers. He is not alone in this assessment – environmental justice groups like Coal for Life and Greenpeace Africa have been voluble in decrying adding 750MW new coal-based electricity to the national grid in 2023 and another 750MW in 2027 (as per emerging long-term plan Table 5).

“Most importantly, on the supply side, renewable energy is currently the cheapest and the quickest new-build option for urgently-needed new capacity. The IRP partly acknowledges this by giving those who can afford their own generation the permission to invest (e.g. in onsite solar), but this leaves the more vulnerable in our society to contend with the double challenge of higher electricity costs and loadshedding. In contrast to what the IRP suggests, investing in lower cost renewables, instead of relying on more diesel and coal, could free up the resources to fund the Just Transition and address legitimate concerns of workers and communities,” said Schers.

The IRP’s policy statement calls for a “just transition plan within a year, in consultation with all social platforms” to deal with decommissioning coal plants, but Zimu cautions this should not be at the expense of people, specifically in Mpumalanga, home to 12 coal powered plants: “Whatever happens with gas gives us the opportunity to convert those coal stations to use gas. Mpumalanga is close to Mozambique and we already have SASOL in that space. The biggest challenge there is the socio-economic one.”

Ngidi believes this just transition plan needs a framework that cannot only be dictated from a national perspective via organisations such as Eskom, but must also include input from local government. “With the skills shortages in municipalities, the framework could look at how Eskom employees at decommissioned stations can be deployed to assist in the municipalities without losing their job. This is one good example of the redirecting of resources where they are needed rather than keeping them in the Eskom salary bill or retrenching them,” said Ngidi.

Alluding to a new job market, in November the minister commented that the IRP2019 continues to make provision for significant rollout of renewable energy and storage, which requires South Africa’s high-grade resources in, at least, six key commodities – for example, vanadium, platinum, palladium, nickel, manganese, rare earths, copper and cobalt – critical in the global energy storage sector. “These resources present a huge potential for the creation of new industries and localisation across the value chain,” he said.

Minister Mantashe added: “Old assumptions should give way. For example, demand is not captive to the national grid; costs are declining as a result of technology advancements; and our national utility Eskom is being restructured into its regulated functions of generation, transmission and distribution.” Can South Africa’s energy generation landscape finally be evolving?

Positively, as Zimu reminds, Minister Mantashe has called the IRP2019 a work in progress, saying it will be reviewed on a continuous basis, “which was lacking with the 2010 plan. We shouldn’t have to wait till 2030 for it to be reviewed. Technology doesn’t wait for the IRP”. ESI 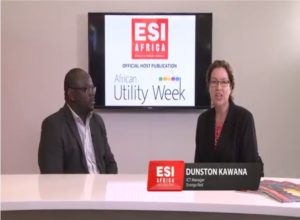