In the midst of the global decarbonisation trend, small- and medium-sized hydropower systems can not only be a source of renewable energy but also play an important role in the challenges associated with the introduction of other renewable energy sources.

Hydroelectric power plants can supply large amounts of electricity, and can easily adjust to demand by controlling the flow of water through an important component, the turbines.

Hydro-turbines are available in many types and shapes to suit the operating conditions (discharge, head) of the power station. It is in this field that Toshiba excels – offering hydro-turbines to meet various requirements and geographical conditions, unique to each installation site.

With the ever-increasing demand for renewable energy e.g. wind and solar power generation, small-and medium-scale hydropower systems can be installed as one solution to stabilise the grid and various needs, such as dams, rivers, industrial water supply, agricultural water supply and waterworks and sewage facilities.

This dedication to addressing the energy market’s demand for future decarbonisation, means Toshiba will continue to develop environment-friendly technologies: the electric servomotor, oil-free Kaplan runner hub, water lubricating turbine guide bearing, and bearing seal against oil vapour, etc., and technologies to improve the reliability and/or maintainability of the system.

An example of a Toshiba project is the grid-connected run-of-river Sondu Miriu Power Station in Kenya.

This project is a run-of-river scheme with an intake weir and holding pond that discharges the required water with a net head of 178m via a 6.2km tunnel and a 1.2km penstock to the vertical Francis turbines. With its turbine and generator manufactured by Toshiba, the scheme has an installed capacity of two 30MW units.

Water from the turbines is discharged into an open outlet channel 4.7km long to the 21.2MW Sang’oro plant. Power generated is fed into the national grid through a 50km long 132kV transmission line into Mamboleo sub-station in Kisumu. There is a provision for an irrigation intake facility of about 2,380Ha of land in the Kano plains.

Systems to meet your unique on-site hydro needs
Toshiba’s expert technical teams can design, manufacture and install various types of high-efficiency, eco-friendly hydropower generation systems. These can be custom designed for unique planned sites with the hydro-turbine varying according to the discharge and head.

Through its run-of-river and small to medium hydro projects, Toshiba Group is actively participating in the energy market attaining the desired decarbonisation levels along with grid stability, which wind and solar resources are currently unable to secure. The environmental challenges of large-scale hydropower are also overcome as less invasive, smaller hydro projects are supported by the appropriate turbine technology. ESI 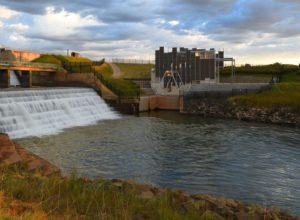