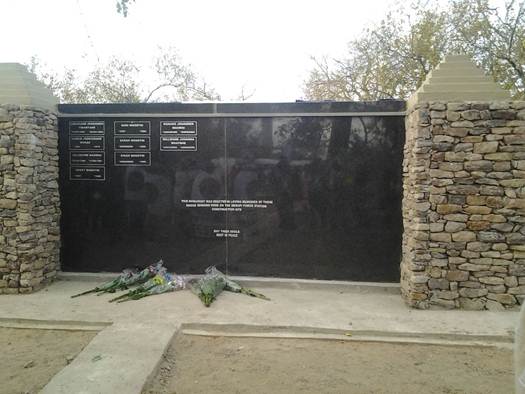 On Saturday, South African parastatal Eskom, unveiled a commemorative plaque in memory of those who had previously been laid to rest at the site where the Medupi coal-fired power station is currently being constructed.

Following traditional rites at the break of dawn for a symbolic relocation of the spirit of the departed to their new resting place, Public Enterprises Deputy Minister Bulelani Magwanishe unveiled the memorial stone and shrine depicting the names of those whose graves might have be moved as part of the recommendations of the South African Commission for the Promotion and Protection of rights of Cultural, Religious and Linguistic Communities (CRL Right Commission), the utility said in a company statement.

Deputy Minister Magwanishe said: “As Government we need to ensure that the cultural heritage of all South Africans is protected.

“We are humbled by Eskom’s gesture of putting a memorial stone so that the Marapong community and the affected families are able to visit their departed loved ones unhindered. A nation without knowledge of its cultural heritage is a lost nation. This process allows us as Government and State-Owned Company to restore the dignity of the affected families.”

The utility said in a statement: “The day’s proceedings follow an extensive process of consultation and engagement with all the affected parties and stakeholders. This has culminated in today’s cleansing ceremony and the appeasement of the ancestral spirits to ensure that the relocated graves are protected and are easily accessible to the affected communities.

Through the representative task team, led by the Department of Environmental Affairs, the recommendations of both the independent heritage impact assessment and the CRL Rights Commission’s investigative report were implemented over the last quarter.”

The following key activities have been completed:

· Putting in mechanisms for ease of access to the graves to the affected communities.

· Through the input and guidance of the affected families, traditional chief of the area and the CRL Right Commission the symbolic Kgoro was designed and constructed.

Eskom Group Chief Executive, Brian Molefe said: “Eskom has worked with the local community and the region’s traditional leadership in its efforts to restore the dignity of the community. This is a very significant day – a moment in our history when we as a nation come together in acknowledgement that in this place lay a people who mattered. A people we loved – an individual and collective ancestry for our family bloodline, the people of Marapong and the South African collective.”

He added: “Furthermore, Eskom has and will continue to work with the surrounding communities, the traditional chiefs of the region, the Provincial Government, the Local Government, the South African Commission for the Promotion and Protection of the Rights of Cultural, Religious and Linguistic Communities, the Limpopo Heritage Resources Authority and the South African Heritage Resources Authority to make sure we acknowledge and respect our common ancestry to light the future of our people.”