"Most of the energy companies in the world agree on one statement: we have entered the era of gas,” said South African energy minister, Mmamoloko Kubayi.

Speaking at an International Gas Summit in Durban this week, Kubayi noted that previous oil and gas companies, are now trading as gas and oil companies, with their gas production and revenues surpassing those of oil.

Kubayi: gas on the upward trajectory

“Gas is the fastest growing fossil fuel – it is estimated that LNG supply will increase by 50% over the next five years,” she said. Read more…

The Minister added: “Over the next 20 years, LNG will catch up with oil and coal and emerge as the main hydrocarbon component of a more sustainable mix to power the world’s economy.

“Thanks to technological advancements like LNG shipping, the nascent but vibrant developments in small-scale LNG and enhanced market liquidity, gas is increasingly accessible, which will see its demand steadily grow across almost all regions.

“Gas market accessibility will also be enhanced, particularly for new buyer entrants like South Africa, by the wave of new innovations observed in the gas industry, such as pricing innovations.”

Policy makers across the globe agree that gas will be an engine of their countries’ economic growth and development in the next decades.

She added: “In response, other BRICS countries like China and India have given priority to move towards gas-based economies and investing in import infrastructure to meet the growing domestic demand.”

According to Kubayi, South Africa has recognised this global shift and has set itself the vision to enter the global gas market and promote the development of a gas market, which will include the Southern Africa Region.

“CCGT plants are cheaper to build and operate than conventional coal-fired plants.  There is a shorter construction lead time for CCGT due to its modular nature of construction and relative simplicity.

“Gas contributes to lowering CO2 emissions and supports renewable energy growth by compensating for its inherent intermittency. Gas is also complimentary to nuclear baseload, as gas plants are leveraged for their flexibility,” she said.

The Minister added: “The establishment of a gas market helps mitigate the decrease in coal production and use (e.g. power plant decommissioning) and fosters the creation of new job profiles and skills to develop, construct and manage new import, transport and consumption infrastructures and tertiary sectors, such as services.”

South Africa’s introduction of gas into the energy mix, could also play a major role in regional development.

Sourcing of gas from neighbouring countries such as Mozambique can result in a win-win situation, where piped gas will stimulate economic activity along the routing areas in both Mozambique and South Africa, the Minister noted.

“A small-scale LNG industry has the advantage of addressing off-grid power generation for mining and industrial needs in remote locations in the region.” 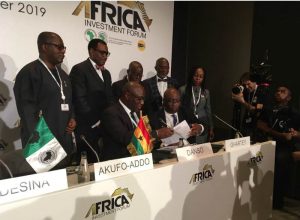 ‘Promise made, promise kept’ by the 2019 Africa Investment Forum