When a specialised dry type reactor failed after many years of service in a major banking company’s backup power generating system, Trafo Power Solutions assisted by leveraging its expertise and applications knowledge.

The transformer supply company supplied and assisted with the installation of a replacement reactor, providing a fit-for-purpose design that accommodated the limited space and awkward position in which the components had to fit.

“The reactor – or inductor – is a key part of the bank’s backup system that feeds a number of buildings in the central business district of Johannesburg,” says Aaron Rost, contracts and proposals engineer at Trafo Power Solutions. “This vital component serves as a link between the utility power, the backup generator and the buildings’ supply.”

Rost explains that the reactor is important for a number of reasons. Among the most important are reducing the bank’s electricity costs, raising the system’s efficiency and contributing to the stability of the municipal power grid.

With its vast data centres, the bank must constantly idle its standby generators online, so that the switchover between utility power and standby power is seamless in the event of a power failure. He notes that to make better use of the fuel consumed by this continuous operation, diesel generators can be repurposed to help alleviate the data centre’s reactive power requirements.

“While active power refers to that element of the power supply that actually does the work – such as driving motors or powering lights – the reactive power is essentially useless power that is being wasted,” he says. “This reactive power effectively draws more current from a grid than what is really required.”

The purpose of dry type reactors

Rost highlights that the reactor stops any of this reactive power from being used from the power grid, This reactor also allows only the active power to be supplied from the grid, and in so doing helps create a more efficient system.

The importance of the reactor’s role in this power system is two-fold, he argues. Firstly, it reduces the bank’s electricity bill, as local municipalities charge a premium rate for the reactive power consumed.

The reactor stops any reactive power from the power grid being used. Conversely, it also allows only the active power to be supplied from the grid. This creates a more efficient system.

A key differentiator in dry type reactors is that the electrical core and coils are cooled by normal air ventilation. Among their safety benefits is their low fire hazard.

“The reactive power raises the tariff that the client ends up paying at the end of the day,” he says. “By preventing the use of reactive power by the grid, the reactor allows the client to save directly on their overall energy costs.”

The second contribution that the reactor makes is that the local municipality does not have to deal with a ‘troublesome’ load, as this type of loading increases the amount of current being drawn.

“This then leads to additional heating in cables, transformers and switchgear, which erodes the life span of this equipment and can potentially lead to premature failure,” he says. “On a grid which is currently in a fragile state, any failed equipment can have massive implications for the equipment that is attached.”

Rost points out that the reactor also serves as a voltage regulator and filter on the utility power being supplied, allowing a more stable power supply to the building. This delivers a further benefit – in the event of a fault, the reactor can help to limit the fault current, making it less likely that costly utility equipment will be damaged. 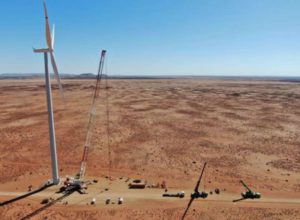 Ahead of schedule: 61 wind turbine installations at Kangnas