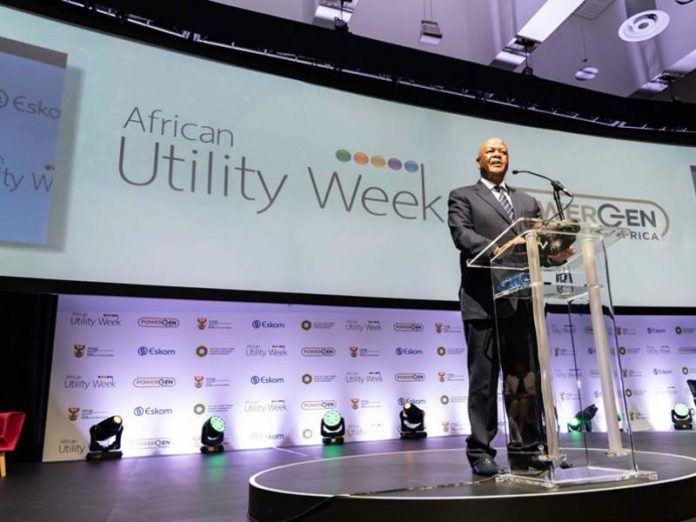 For the past 20 years, one prestigious event has not failed to inspire Africa’s energy, power and water stakeholders to openly discuss the challenges and broach innovative solutions. Now, at the start of a new decade, the African Utility Week and POWERGEN Africa conference and exhibition is ready to broach trending topics.

The 20th edition of Clarion Events’ flagship energy and water event on the African continent, African Utility Week and POWERGEN Africa, will return to Cape Town, South Africa from 12-14 May 2020. The impact of unreliable electricity This leading three-day exhibition and conference for the African power, energy and water industry will once again gather over 10,000 industry professionals from over 80 countries (37 African countries) and 82 utilities and municipalities, to connect at numerous side events, discover new products and services with over 360 exhibitors, and learn from over 350 renowned experts in a strategic conference and at the free-to-attend Knowledge Hub seminars.

As regular attendees have become accustomed to, the programme promises to provide a thought-provoking experience for delegates, divided into five distinct but not mutually exclusive focus areas. The Finance & Investment and Strategy track will gather financiers and investors to unpack today’s energy complexities and facilitate well considered decision making.

Smart Energy embraces the digitalisation of the utility distribution sector by encompassing metering, IOT, storage and the convergence of IT/OT. The Water track will bring together experts from public and private sectors to support municipalities and utilities to become more responsive, efficient, and drivers in water security practices.

Energy Revolution Africa returns as the popular and dynamic meeting place for solution providers, consultants, renewable energy producers and energy leaders to develop alternative solutions and accelerate the sustainable electrification of Africa. Particular attention will be paid to the priorities of the Commercial & Industrial sector around security and stability of power supply. The success of last year’s Future Cities prompted the organisers of African Utility Week and POWERGEN Africa to bring back this forum specifically exploring solutions needed to confront Africa’s current urban living challenges. This will bring together city leaders, developers, regulators and the finance sector to explore best practices and high-tech solutions to make smart cities a reality for Africa.

In the run-up to the event, ESI Africa met up with several of the event’s Advisory Board members who work in the north and the south of the continent, in the power and water industry. The conversations covered exciting projects they are involved in and their views on the challenges and opportunities in the sector.

A young nation looks to the future

“South Sudan Electricity Corporation (SSEC) is working around the clock to streamline its electricity sector in the country,” says Jacob M. Deng, the Director-General for Planning and Projects at SSEC in Juba – the capital city of the Republic of South Sudan, a young nation that gained independence from Sudan in 2011. Juba is situated on the White Nile River. “Since there has never been reliable power generation in South Sudan, it is prudent to acquire good practice (skills transfer) from established energy utilities such as Eskom.”

Deng is very excited about the current projects in the South Sudan power sector financed by the World Bank and African Development Bank (AfDB): “We have established the South Sudan Electricity Master Plan under the World Bank. This project would appeal to the national government regarding the need to map power sector investment. The sector also has implemented the Juba Power Distribution System Rehabilitation and Expansion Project that was commissioned in 2019. This has set a benchmark for the extension of the standard distribution systems for the country.

“My vision is a robust South Sudan electricity power sector in the next three years. The energy sector is yet to develop and will require huge undertaking in terms of planning and financing.” He adds that there is a need to analyse the best model – whether BOOT, BOO, BOT, IPP etc. – to attract investment in the power industry.

“I was surprised about the way the private sector is involved in the power industry in South Sudan,” says Deng. “In other countries, it is the utility that identifies projects that require investments and publishes adverts to that effect. The potential investor wins the project through competitive bidding. This has not been the case here [in South Sudan].”

While a fledgling nation such as South Sudan is looking to South Africa’s Eskom as an example of what a utility on the continent could or should be, South Africa’s utility has been struggling recently to avoid loadshedding and further damaging an already frail economy. In 2017 the City of Cape Town took the Department of Energy to court to allow the city to procure its own electricity – a case set to be heard in May this year.

“The case is ground-breaking and potentially an exciting one for the sector as a whole,” says Kadri Nassiep, the Executive Director of Energy at the City of Cape Town. “If the courts rule in favour of the City it will trigger a public tender process to bring additional generation on stream, mostly from independent sources. This will open the door for other municipalities to follow suit and in the process, relieve some of the burden imposed on Eskom by the current legislative and regulatory framework.”

Nassiep’s vision for the sector is “an open, liberalised market that enables competition while at the same time focusing on job creation and local economic development. The devolution of state-held power in favour of local authorities will bring about greater energy security of supply and resilience to impacts of loadshedding. Appropriate financing instruments will also enable consumers to afford the uptake of clean energy, particularly as the cost of photovoltaic power and energy storage continues to decline rapidly.”

He adds: “I can also envisage a scenario in which an Eskom Lite is formed, as part of the restructuring process, and this entity provides distributed generation capability to the smaller municipalities. This will include the establishment of smaller, mini- or micro-grids.”

The City of Cape Town is the official host city of African Utility Week and POWERGEN Africa.

Staying with finance and investment strategies for the power and energy sector, utility pioneer Penny Herbst, a former Eskom executive and current Strategy Director at Africa GreenCo, believes that the business model for energy investment needs to change.

She explains: “There are far too many players that are comfortable with the same structures for investment, selling to an SOE with a government guarantee. What we really need at present is for investors to have a stake where their influence contributes to improving the ESI as a whole. Energy investors need to reconsider their business models especially with regard to their ability to take on more risk. Innovative new business models and an ability to move away from the traditional PPA package, which is supported by government guarantees, are yet to be tested and the ESI with all its constituent components largely contributes to this. Africa GreenCo aims to increase private sector investment in energy generation in sub-Saharan Africa by mitigating the credit risks associated with the current lack of creditworthy offtakers.”

Isle Utilities, where water sector pioneer Dr Jo Burgess is a senior technology specialist, recently signed an MoU with South Africa’s Water Research Commission (WRC) to work together to accelerate the market entry of technologies. Says Burgess: “I am very excited about that. It means that from WRC research funding, there is a seamless pipeline for South African technologies to move through research, development, demonstration and uptake. Isle has a global network of >200 technology users, so we are able to channel amazing new home-grown technologies out into the world.”

She continues: “With so many startups and so much technology out there, it is difficult for staff in the utilities to differentiate the good new tech from the repackaged old tech, or the just plain gimmicks being shown to them. This is not only bad for the utilities but also bad for the start-ups that genuinely have a great, disruptive new technology that deserves support. There’s no such thing as a one size fits all solution to the challenges we face. We need as many tools in the box as we can get.”

A previous chair of the board of the Water Institute of Southern Africa (WISA), Burgess is of the opinion that the water sector in Africa “is about to meet a massive digital revolution, and I am excited to be here to take part in that. New, digital or virtual tech like AI, blockchain and AR/VR will revolutionise the way we manage assets, predict events and monitor situations in real time. Certainly I don’t think I personally have fully grasped what the impacts will be.”

“There are notably good innovations in the country; some never make it to mainstream markets due to legislation impediments for procuring innovation,” says Dr Rethabile Melamu, General Manager: Green Economy at The Innovation Hub, which was established by the Gauteng Department of Economic Development. She adds: “Promotion, support and embracing entrepreneurship in the sector are not necessarily about competition. Embracing start-ups as strategic partners has the potential to propel the industry to greater heights.”

“Utilities should be creative and agile and look beyond political will where possible. Without that they will struggle for relevance as small players compete for the same slice of the pie in the future. There is a need for bold and risk-taking leadership. Leadership that embraces talents within utilities.”

“South Africa is approaching physical water scarcity by 2025,” says research fellow at the Nelson Mandela University Dr Hlamulo Makelane, “and its socioeconomic development has been directly hampered by the recent drought. The country is expected to face a water deficit of 17% by 2030 based on the current usage trends, and this shortage will only be worsened by climate change.”

During the 2019 water programme at African Utility Week and POWERGEN Africa, Dr Makelane made headlines during her presentation when she revealed that despite South Africa being a water scarce country, expenditure on research and development for water security did not reflect this picture. She stated that funding for water research had declined over the last five years, which was highly problematic. She also stressed the need for intersectoral funding between government and the private sector for more progress towards water security. ESI