The South African government is putting plans in place to roll out hydrogen fuel cell technologies in various parts of the country.

In collaboration with the private sector, these government-led projects will serve as alternative energy sources to the country’s electricity grid.

Department of Science and Innovation (DSI) Director-General, Dr Phil Mjwara said that such partnerships will enable the government to take alternative energy sources to rural areas while also contributing to the growth of the country’s green economy.

Dr Mjwara was speaking at 1 Military Hospital in Pretoria on Wednesday 19 August, where the government has set up a field hospital to prepare for the potential increase in COVID-19 patients.

The department unveiled seven hydrogen fuel cell systems as the primary power source for the field hospital, which has facilities for testing and screening, as well as life-saving equipment such as ventilators in the intensive care unit.

The project is a partnership between the DSI, the Department of Public Works and Infrastructure, the Department of Defence and private companies including Bambili Energy, which is committed to commercialising intellectual property developed through the DSI’s Hydrogen South Africa (HySA) Programme.

Bambili Energy is working on an initiative to take some of these fuels cells to rural areas in the Eastern Cape and KwaZulu-Natal provinces. “This is the start, but the idea is to roll the project out to various parts of South Africa,” said Mjwara.

South Africa’s Secretary for Defence, Ambassador Sonto Kudjoe said that the field hospital is now operating using only the fuel cell systems, while Eskom’s electricity grid serves as a back-up.

“It is encouraging that there was an opportunity to scale up the project. We can extend the systems to many parts of the country and relieve the burden on Eskom, while transferring skills in the development of hydrogen fuel cells in the country,” said Ambassador Kudjoe.

Bambili Energy CEO, Zanele Mavuso expressed excitement at leading the deployment of the fuel cell systems to contribute to the government’s response to the COVID-19 pandemic.

“This is also an opportunity to demonstrate the potential role alternative energy sources can play in our everyday lives, given South Africa’s growing energy challenges,” Mavuso said.

Further contributions in the form of methanol and hydrogen for the fuel cell units were received from Air Products South Africa, Protea Chemicals and Sasol.

Protea Chemicals Interim Managing Director, Pieter Swart, said they are looking forward to the partnership, and to working with the Bambili group and the various government departments involved in the project.

Given its experience in the production and handling of hydrogen, which it uses to produce liquid fuels, fuel gas and chemicals, Sasol will donate 10,000 litres of methanol and 600kg of hydrogen monthly until April 2021.

This will help to power the field facility.

Other partners in the initiative include South Africa’s HyPlat, Singapore’s Horizon Fuel Cell Technologies, the US company Element One, and Powercell Sweden.

Hydrogen fuel cell technologies are globally recognised for their potential to decarbonise the energy and transport sectors.

Fuel cells produce electricity by means of a chemical reaction, using hydrogen as the basic fuel and platinum-based catalysts.

Besides being efficient and reliable, fuel cells can be deployed rapidly and scaled up easily as the need arises, and their maintenance costs are relatively low. 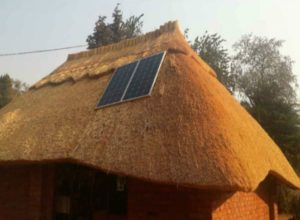 Utilities don’t need to solve energy poverty by themselves