In an exclusive interview with Don Taylor, Director of the Standard Transfer Specification Association (STS), ESI Africa uncovers a threat to all utilities’ prepaid meters worldwide, which calls for urgent attention.

Don, tell us more about the impending TID Rollover Timelines challenge that is facing utilities.

Every prepaid electricity user and utility should be made aware that the token identifier (TID) has a limited range and will run out in November 2024.

The TID is calculated as the number of minutes that have elapsed since a defined base date of 1993 up to the time of creating the token. The TID has a limited range and will run out in November 2024, at which point all existing prepayment meters will stop accepting credit tokens.

In order to circumvent this issue, the memory of each meter needs to be cleared of all stored TIDs and its cryptographic key needs to be changed before 2024. The new range of TIDs will then start from a new base date of 2014 and run out in 2045, thus extending the useful functional life of the meter. In order to do this key change, it is necessary that each meter has to be physically visited, which can be performed either by dedicated employees of the utility or by the end customer.

There is thus a six-year window, within which the utilities have to complete this programme. Because we are concerned that utilities may leave this too late, we are embarking on an awareness programme by reaching out to all STS users and providing a platform that will facilitate technical support and guidance to users during the implementation of the TID rollover programme.

We aim to establish a website for this purpose where users can interact by discussion of issues. In addition we are embarking on a communication effort with users by making use of media channels and conference events in order to raise awareness of the 2024 TID rollover. This programme is being managed by a specially mandated task team.

What can be done to prevent any tokens being rejected?

Utilities need to upgrade their vending systems to STS600 and each meter has to be visited in order to clear the memory and to change the meter key before November 2024.

How many prepaid meters are in use in South Africa? How many will be in use by 2024?

We estimate approximately seven million are currently installed in South Africa, which could still grow to approximately eight million by 2024.

And how many prepaid meters will be affected by the rollover issue by 2024 world-wide?

The STS estimates that there are approximately 50 million meters that are currently installed globally, which will definitely be affected by the rollover. If utilities are sufficiently proactive, then it is possible that all new meters being installed can be manufactured on the new base date of 2014, thus avoiding the 2024 event for these newly installed meters. It could well be that approximately 70 million meters in total will be affected between now and 2024.

What else is new and exciting in the world of metering?

The publication of IEC62055-41 edition 3 in support of STS600-4-2 is a significant milestone for the STS Association and STS users. The security level of the STS has now been enhanced to that approved by NIST for use up to 2045.

The STS is now well integrated with the world of smart metering by means of the STS101-2 DLMS/COSEM virtual token carrier interface. This enables STS tokens to be sent to on-line connected smart meters using the DLMS/COSEM protocol, while providing a backup off-line channel by means of the keypad as token entry device.

Currently under development is a new bulk token specification STS202-7 for transferring tariff information, meter readings, control and status to and from the prepayment meter. This further enhances the STS integration with evolving smart metering technology.

NRS049 is well suited to be used as a blue print for smart metering systems in Africa and is currently under consideration by AFSEC TC13. Lastly, tell us a bit about the STS association – there is a proud history there. The STS was created in South Africa in 1993 as an industry standard to support Eskom’s mission of ‘Electricity for All’ and its electrification programme to connect 10 million households to the electrical supply grid by making use of prepayment metering technology.

The association became the custodian of the STS in 1997, which was then published by the International Electrotechnical Commission (IEC) as IEC62055-41 and IEC62055-51 as open international standards for prepayment meters. With ongoing development of functional and security enhancements, IEC62055-41 is currently in its third edition.

There are currently approximately 170 members from 36 countries, almost all of which are manufacturing STS compliant products. We estimate that there are in the order of 50 million prepayment meters deployed in 102 countries at present. ESI 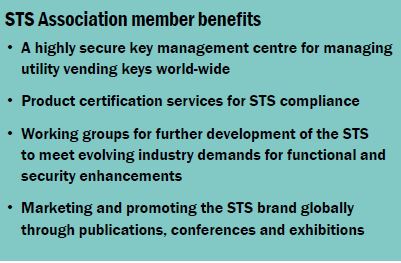 The STS Association is a returning industry partner and exhibitor at the upcoming African Utility Week conference in Cape Town on 15 – 17 May 2018, where metering conference sessions and technical workshops will take place. 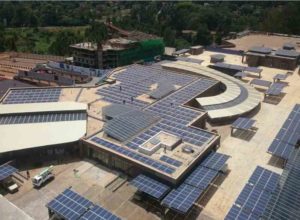 Energy progress: One mini-grid project at a time