“Artificially capping alternative or own supply to 10MW has no legitimacy when Eskom is incapable of providing security of supply.”

Op-ed by Ted Blom, independent power and mining expert, and commentator and a partner in Energy & Mining Advisors.

Since the first major blackouts in January 2008, through to the continued intermittent blackouts in 2014, 2015, 2016, 2019 and now again in 2020, the major question that begs an answer is whether Eskom, South Africa’s state-owned power utility, will ever regain its former glory as a world-class cheap supplier of reliable industrial power.

While such a question might upset the current Eskom leadership, the truth is that Eskom’s track record has become very patchy. Seems even the Chinese investors in the steel industry in Limpopo had their concerns, hence they are erecting a 4,000MW power station to supply their own needs.

The alarm bells should have sounded non-stop since the first warnings erupted in 2008.

The alarm bells should have sounded non-stop since the first warnings erupted in 2008, as that was when Eskom effectively became hijacked and embarked on a super-high tariff trajectory, multiple times the consumer price index (CPI).

To sustain its growing appetite to squander billions of rands, it was vital that Eskom capture the SA economy and hold it to ransom, all perfectly executed with very few persons, other than myself, blowing the whistle.

Now with perfect hindsight, every Tom, Dick & Harry is an expert on Eskom and its miscreant culture that allows gross misdemeanours, massive governance lapses, stealing and corruption.

A further problem that creates mistrust among electricity end-users is the mixed messages sent by Eskom’s leadership.

On the one hand, they explain in detail how they need to load shed customers for the next 18 months so that they can fix up years of maintenance backlogs as well as refurbish the very fleet they nearly ran into the ground.

To date, no budget numbers for this have been published, nor has the source for the vast sums of money this will require been identified.

On the other hand, the same leadership boasts that there will be no more than three days of Level 1 loadshedding in the 3rd quarter of 2020.

Business, and even home customers working from home, need supply certainty – that is NON-NEGOTIABLE.

artificially capping alternative or own supply to 10MW has no legitimacy…

Given the forked tongue message emanating from Eskom, stakeholders need to be given the freedom to make their own arrangements for the future security of supply – from small users to the largest smelters – artificially capping alternative or own supply to 10MW has no legitimacy when Eskom is incapable of providing security of supply.

Added to that the demands from Eskom for a much higher tariff trajectory, the future is clear – either the market for own generation is opened up, or business will relocate to an environment where their needs can be satisfied – both in terms of security of supply and affordable tariffs.

About the author:
Ted Blom is a Partner at Mining & Energy Advisors and is a regular contributor to ESI Africa, and panellist and speaker at African Utility Week & POWERGEN Africa. 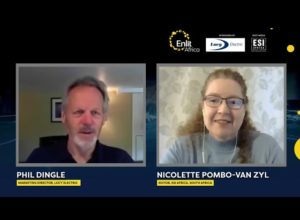