Independent environmental campaigning organisation Greenpeace is calling on African leaders to declare a climate emergency as changes in weather continue to affect sectors such as agriculture.

Weather across sub-Saharan Africa has become more extreme and unpredictable in the twenty-first century, a trend that climate scientists anticipate will become more pronounced in future decades. This is the key finding confirmed by a comprehensive report published by Greenpeace Africa and the Greenpeace Science Unit.

The report, Weathering the Storm: Extreme Weather and Climate Change in Africa, explores the relationship between extreme weather events and climate change in Africa and summarises the scientific data on how the climate crisis is spiralling out of control across the continent, including irregular extreme heatwaves, floods, droughts and cyclones at a scale hitherto unknown.

Climate-related problems can often be disproportionately felt in the poorest communities because they are least equipped to cope with and adjust to changes.

“Science shows there is very little that is natural in the disasters striking our continent. A human-made crisis requires a human-made solution. Africa is the cradle of humanity and it shall be the cradle of climate action for our future,” said Melita Steele, Greenpeace Africa programme director.

Steele added: “Health, safety, peace and justice will not be achieved only through prayers and bags of rice and maize in the aftermath of a disaster. Only the one who preserves has no misfortune – and African leaders must declare a climate emergency to preserve our collective future.”

Key findings of the report include:

“There needs to be better incorporation of indigenous knowledge in scientific evidence on extreme weather events in Africa. African countries need to be more involved in leading the development of new databases and models rather than being dependent on countries outside Africa. This will ensure better communication, planning and future projects of events. Access to information needs to be provided at a community level,” stated Ndoni Mcunu, climate scientist, founder of Black Women in Science and co-author of the report.

Hindou Oumarou Ibrahim, director of the Association for Indigenous Women and Peoples of Chad (AFPAT) commented: “Over the last 50 years, we have already experienced a warming of 1.5C ℃ well over the world average. In the Sahel, climate change destroyed our crops, our homes and tore families apart through forced migration. But Africa is not only the stage where the worst climate impacts will play out; it is a continent of millions of citizens determined to stop climate change, to move away from fossil fuels, who will stand up to protect our forests and our biodiversity from industrial agriculture.”

Ugandan Climate Activist Vanessa Nakate, added: “I have seen climate change disproportionately affect the people in my community, in my country and the African continent. It is disastrous for agriculture which is key to our survival; our livelihoods are in danger with everything being lost to floods, droughts, and heatwaves. Leaders: you must wake up, you must listen to the science, and you must face the climate emergency. We must put an end to food and water insecurity, to the violence, to the gender inequality that is being caused by climate change.” 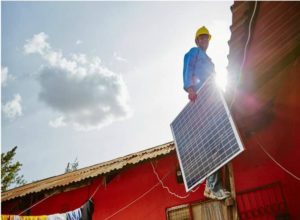