A mini power station has been installed on the River Thames at Romney Weir by UK Company, Southeast Power Engineering.

The screws are manufactured by Netherlands Company Landustrie, specialists in waste water. Each screw weighs 40 tonnes which is connected to generators that are producing 320 kW/h at peak water flow.

‘The WEG W22 units are ‘special’ products for this application in the sense that they are generators based on a WEG W22 motor. When the screws need to be restarted, electricity is used, and then as the speed increases, so the motor function changes over to that of a generator. The rotation of the screw is maintained by the water which, in turn, maintains the generator speed in order to produce the electricity’, said in a statement.

This project was designed by David Dechambeau, Managing Director of Southeast Power Engineering, who has been involved throughout the whole process.

‘In order to make this project sustainable, it was essential that we select the most efficient equipment for the construction of this power station. The design called for a reliable generator with superior efficiency ratings and on balance the WEG component definitely fitted the criteria and it was straightforward to install’, he said.

The station is in its final phases of testing and commissioning, where it has been generating power since July 2013.

WEG’s European manufacturing plant in Portugal is where the WEG W22 IE3 generators were produced. 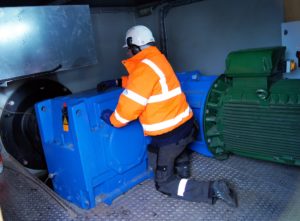 The statement said that ‘they are rated at 185 kW and produce electricity at 400 V’. The power then goes through a 500 kVA transformer through to an underground connection that links to Windsor Castle and the national grid.

Included in the statement was how the project was centred on efficiency and the installation has a fixed return on investment (ROI) period.

‘At 96% efficiency, the WEG motor/generators represented one of the best investments Southeast Power could make in the power transmission design to ensure their six-year ROI target was met.’

The installation has a 50 year guarantee and Southeast Power has 40 year land ownership, translating into the importance of long term growth and sustainability of the project. If anything goes wrong it will have a direct impact on revenue which is why it is imperative for such dedication.

“This was a very important project for us, not only because we are supplying the Royal Household, but also as an initial stepping stone for a number of similar projects. It is essential that we install the most efficient and ecologically sound power plant as possible. The work we are completing now will help to deliver future projects using similar technology as demand for sustainable power is going to increase,” Dechambeau concludes.

This echoes the renewable industry’s goals which are to create reliable and sustainable power for the whole African continent.