27 March 2012 – Util Labs has developed the Low Voltage Smart System (LVSS) that brings the entire low voltage network in real time to a utility’s control room in a secure and cost-effective manner not previously possible. Traditional systems available to power utilities did not allow this to be practically implemented in the low voltage environment.

The LVSS can shift peak load, and if necessary, save base load by promoting consumer behaviour to adopt other sources of energy like gas, solar, coal (fireplaces) etc. It ensures that the responsibility for using electricity sparingly (whilst maintaining a lifestyle) is transferred to the consumer.

Customers in the residential sector are given a plug and play display device called EDDI that gives them current and accumulated consumption readings for their premises in real time. This makes them aware of their electricity usage and allows them to make conscious decisions on where to apply savings without inconveniencing themselves. Experience has shown that with an EDDI installed, customers adopt diligent energy saving behaviour and realise the importance of having energy saving appliances.

The device also allows customers to detect faulty appliances in their home, reducing the chance of unintended excessive usage and potentially unsafe conditions.  The EDDI can be used as a communication tool by the utility to send customers power alerts and other related message either as mass messages or on a one-to-one basis.

Supplementary to the EDDI initiative is a simple web interface called the Consumer Consumption Console (CCC). Available exclusively to EDDI customers, the CCC gives a historical view of electricity consumption and allows the consumer to accurately equate his/her energy saving efforts to electricity saving in kWh which in turn equates to rands and cents. The CCC also equips customers with the tools needed to calculate their water usage and carbon footprint generated as a result of their electricity consumption.

The following study depicts the results of 400 households that have EDDIs (distributed from Week 6 onwards – Week 1 being the first week in February 2011) compared to a control group of 1,600 residences that don’t have EDDIs. The graph shows a definite energy saving, for week 12 and 13 the savings exceeded 10%. 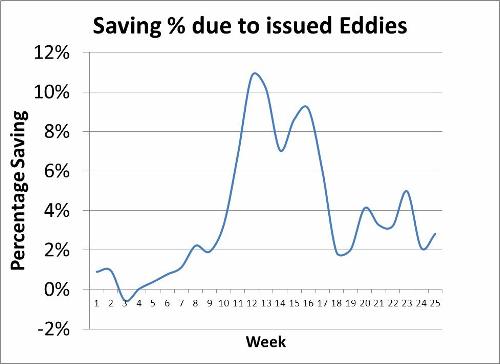