Eskom’s Residential Load Management (RLM) programme is rolling out across the country with clearly measurable results, yet paradoxically intangible effects. The very real success of the programme can be seen in the impact that has been achieved on the demand for electricity during peak periods, but at the same time consumers have hardly noticed any effect (if at all) on their daily lives, simply because they can still draw hot water whenever they need it. This offers an excellent example of Demand Side Management (DSM) in action, whereby the patterns of consumption are changed in order to match a utility’s load or demand profile. There are two main avenues available to a DSM approach: one known as load management, which involves changing the times of consumption, while the other is obviously energy efficiency. In the latter case, the focus falls on improved efficiency in terms of technology (for example, the use of CFLs for illumination) and behaviour (such as using a kettle rather than a stove plate to boil water).

RLM forms a key part of the load management component of the overall Demand Side Management strategy. The reason for this is very simple: the residential sector places a significant load on the national grid, consuming more than 17% of the total electricity generated by Eskom daily. What is more, during peak periods (between 07:00 and 10:00 in the mornings and from 18:00 to 21:00 in the evenings) residential consumers account for almost a third of the total electricity demand, so clearly the need for greater energy efficiency had to be brought home, quite literally. 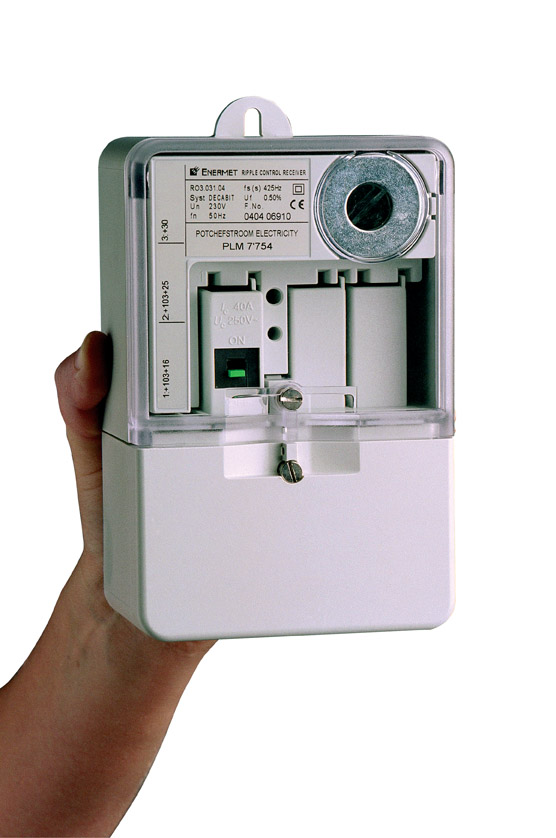 Careful study of the home environment soon revealed that hot water cylinders, more popularly known as geysers, were major culprits in terms of driving domestic demand. A typical geyser would use approximately 3kW per hour, re-heating water that was actually still warm – simply because the thermostat had detected that the temperature of the water had dropped below a pre-set level. Often the consumer would not actually notice the difference between water at 58 or 60 degrees Celsius, but the thermostat, being an electro-mechanical device, would react automatically because it is set to do so. The potential for significant saving existed – but how could consumers be persuaded to switch off their geysers during peak times?

The answer lay in doing it for them, by means of a remote control system. A small control unit or relay was connected to the geyser’s electrical supply circuit in the consumer’s home. This could then be switched on and off by means of a radio signal or a “ripple” transmitted via the mains. Groups of geysers in specific residential areas could then be switched off for a pre-determined period, reducing the overall demand at any one time. Careful calculations had revealed how long the average geyser could be switched off before a typical household would experience a noticeable drop in water temperature – and this was factored into the equation. The technical problems had largely been solved – the challenge lay in overcoming consumer resistance.

Fortunately, Eskom’s DSM has a “people-focussed” marketing approach, with a dual approach to the communication strategy. Firstly, the communication campaign set about obtaining buy-in from the community and other stakeholders, including local authorities. The second objective of the campaign was to keep residential consumers fully informed about all relevant aspects of the project, especially the measures put in place to ensure the safety and security of their households during the installation process. Information was also provided regarding the way in which the RLM system functioned and the benefits that it would bring in terms of controlling tariff escalation. Particular attention was paid to addressing issues identified in specific regions.

While RLM can by no means be called a panacea, it does offer an efficient and, for the consumer, a relatively painless means of controlling peak demand. It has also served to make domestic consumers more aware of the role that each one of us must play in reducing what appears to be our contemporary society’s insatiable demand for energy. Whereas remote control can take care of energy-guzzling geysers, wasteful consumers must learn self-control – and therein lies the greater challenge.