A case study addressing the modernisation of lifting equipment circuitry, written by Shelton Munyaradzi Muzembe, an electronic engineer with a bias towards automation and circuit design.

Energy is an important factor in all economies and as such Zimbabwe is no exception.

Lifting equipment (elevators, escalators and industrial lifting such as overhead cranes) play a critical role in the movement of people and goods, manufacturing processes and the construction industry.

This article originally appeared in Issue 1 2018 of ESI Africa print magazine. The digital version of the full magazine can be read online or downloaded free of charge.

In Zimbabwe the challenge for lifting equipment lies in the deteriorated state of assets and the reliability of power supply. Most of the country’s lifting systems are made up of electromechanical control systems that are heavily outdated, dating back as far as 1956.

The result is low efficiency levels of these systems and faults frequently occurring due to damaged insulation on wires and residual magnetism in controlling relays.

The majority of companies are indigenous and reluctant to modernise due to high initial installation costs for new assets.

Stakeholders in the lifting industry, including manufacturing and real estate markets, are in dire need of efficient and reliable lifting equipment.

This cannot be overemphasised!

During my tenure at Clovgate Elevators in Zimbabwe, I was tasked with design for replacement of the current lifting equipment contracts with more efficient systems.

The new system design would eliminate costs associated with initial installation. This system was also showcased at the ZITF 2010 – a regional business platform for industries such as the MCES (Micro Controlled Elevator System).

Although the materials and methods used will now seem outdated, the conditions at the time required a solution with the available resources in a failing economy. As such, there were very few options for budding engineers.

This situation has not changed to this day. The presentation herein presents an idea that could change the face of energy usage in developing countries. This system was used to transport goods in manufacturing companies. A more rigorous approach would need to be employed in terms of circuit design and programming for a system transporting people.

The system consisted of a micro- or pico-controller PIC16F872. This pico-controller was chosen because of its fast instruction cycle (200ns) and low power consumption (1.6mA typical at 5V, 4MHz).

The PIC16F872 would take care of all the timing requirements with the use of a crystal oscillator. Also resident was the programme to regulate stops and other emergency routines in case of a malfunction.

The outputs and inputs required interfaces because the microcontroller is powered from a 12V source. Important circuits here were the powering and safety circuits. The outputs of the micro-controller were connected to 12V solid state relays for switching of higher voltages.

Thus interfacing the ‘brains’ of the circuit was the real challenge here.

These outputs would then give power to the power contactors. Speed was not a factor here and so drives were not employed. The aim was to come up with a very portable control system that would be easy to install and save power.

The power levels were no longer 220VAC and 380VAC but were reduced to 12VDC. This was a deviation from the norm where high voltages were used for control purposes losing power to heat and light caused by arcing during switching.

A mask was then developed and transferred to the PCB. The board was then etched using a bath of ferric chloride overnight. The circuit obtained was checked for errors.

The PCB was washed and dried and the holes for components drilled.

The PCB was then populated with components. A ZIF socket holder was used for the pico-controller so that it could easily be removed to prevent damage to it.

In essence the controller was a 12V PLC that was built from scratch.

After testing with inputs and outputs the controller was finally installed and worked with a few adjustments. 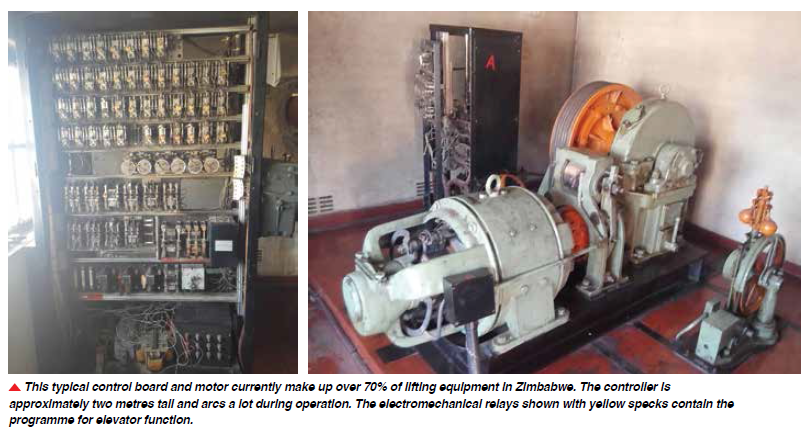 This case study shows that MCES built from shelf components, from scratch – although the methods employed were tedious and time consuming – opens the gate to innovative possibilities in a world that is faced with the challenge to create sustainable energy generation and efficient use of it.

If a design is perfected then mass production would ensue and provide solutions in various industries across the globe. The advantage of such a design is that it will use the existing infrastructure like hallway fixtures, motors and gears.

Faster controllers with better performance characteristics are also available in the automation industry.

Engineers on the African continent are faced with the challenge of creating systems that solve Africa’s problems, especially for developing communities.

Most emerging companies have little start-up capital and targeted solutions like these are ideal for them. Proprietary products in industry cost more to acquire, install and maintain.

Engineers can now take advantage of the advent of affordable, emerging software and hardware products to create and innovate. ESI

This article originally appeared in Issue 1 2018 of ESI Africa print magazine. The digital version of the full magazine can be read online or downloaded free of charge.