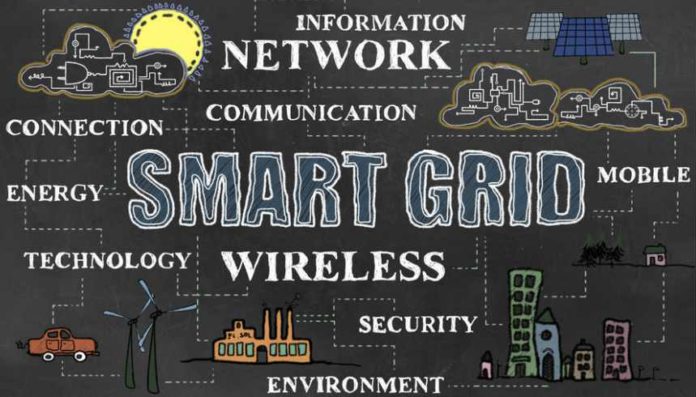 A Smart Grid is essentially an electricity generation, transmission and distribution system that can automate and manage the increasing degrees of complexity and requirements associated with modern power networks. One of the more crucial aspects of the Smart Grid is the ability to monitor and control the grid, thereby enabling optimal management of grid assets and, as a direct consequence, the reduction in occurrences of unplanned outages.

Furthermore, the technology deployed to implement a Smart Grid will integrate and support renewable energy sources such as solar, wind and hydro, as well as provide consumers with real-time information concerning their energy consumption and thereby empowering them to effectively manage their electricity usage.

The Smart Grid is defined in the European Union’s Smart Grids Strategic Research Agenda 2035 as “[…] an electricity network that can intelligently integrate the actions of all users connected to it – generators, consumers, and those that do both – in order to efficiently deliver sustainable, economic and secure electricity supplies.” (EU Report, 27).

Why are smart grids necessary?

Traditional grids still operate in a similar manner as those of almost 100 years ago, i.e. energy flows over the grid from central power plants to consumers, and reliability is ensured by preserving surplus capacity. The result of this philosophy is an incompetent and environmentally extravagant system that is the primary emitter of greenhouse gases and consumer of fossil fuels. Nevertheless, fossil fuels continue to form the dominant source of energy, particularly in industrialised countries. Existing grid topologies are simply not well suited to distributed, renewable solar and wind energy sources, as the capricious and often intermittent nature of these sources pose significant problems in a grid that cannot disseminate information to control centres rapidly.

Recently, a paradigm shift has taken place in the way electricity is generated, transmitted and consumed. The aging power grid also faces new challenges posed by higher demands and increasing digital and nonlinear loads. And the sensitivity of digital equipment (as found in data centres and consumer electronics) to intermittent outages has certainly redefined the concept of reliability.

Continued economic growth and improvements in the quality of human life is very much dependent upon access to affordable and reliable electricity. However, more often than not, existing grids suffer infrastructural problems due to the fact that systems are simply outdated and unfit to deal with increasing demand. As a result, network congestion occurs more frequently as the ability to react quickly does not exist. Ultimately these limitations can lead to blackouts and the consequent domino effect due to the lack of communication between the grid and its control centres.

Currently consumers do not have access to real-time information that could empower them to make optimal decisions regarding power usage relative to the market. This could enable them to reduce consumption during the most expensive peak hours and take advantage of reduced tariffs during off-peak times.

Smart Grid represents a host of solutions that can address all of the above-mentioned. Indeed, a complete implementation will make renewable power feasible and equip the grid to meet increasing energy demands. More importantly perhaps, the technology will also allow consumers near real-time control of their energy bills and facilitate large-scale electric vehicle charging.

Characteristics and benefits of Smart Grid

In summary, Smart Grid involves innovative products and services in conjunction with intelligent monitoring, control, communication and self-healing technologies. The following attributes can be associated with Smart Grid:

A noteworthy consideration is also the cost of energy to the consumer. The seemingly relentless price increments can surely be, at least in part, attributed to the numerous inefficiencies associated with current grid infrastructure. Since Smart Grid will certainly address many of these and bring additional enhancements, it is envisaged that the consequent reduced operations and management costs incurred by utilities will ultimately drive energy costs down for the end consumer. 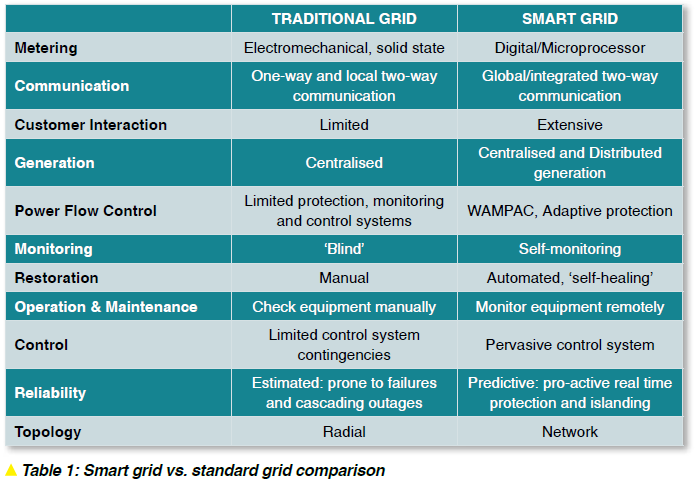 There are numerous issues that contribute to the incapability of traditional grids to competently address the demand for consistent power supply. Table 1 contains a comparison between the characteristics of a tra

ditional grid and those of an equivalent Smart Grid while Figure 1 illustrates this in a graphical representation. 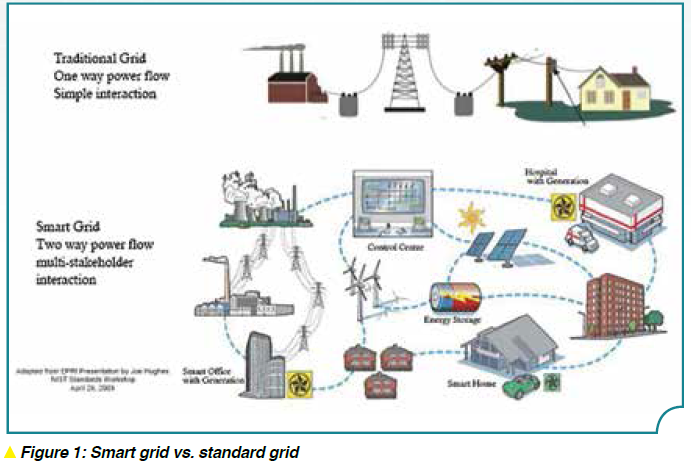 Within the Smart Grid environment reliable and real time information is a crucial aspect to ensure reliable delivery of power from generating units to the end user. Hence, intelligent monitoring and control, enabled by modern information and communication technologies, is a crucial requirement to ensure effective operation and management of the system.

1) From sensors and electrical appliances to smart meters; and

2) Between smart meters and the utility’s data centres. 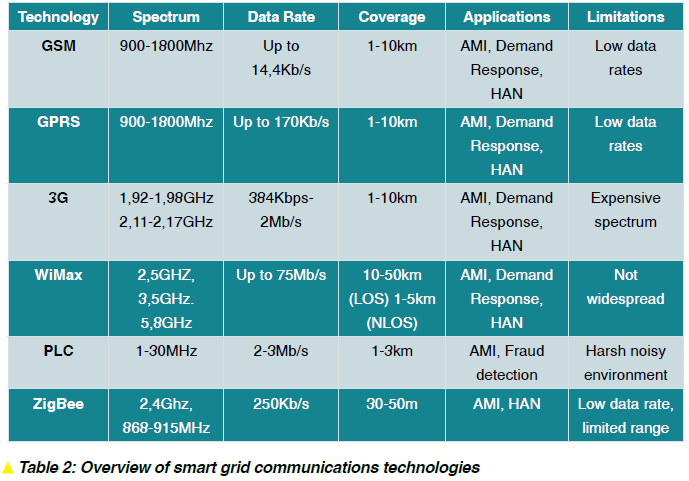 From the above it can be ascertained that, irrespective of networking technologies employed, wireless communications will play a key role in the deployment of a Smart Grid communications system and, as such, will require significant additional radio frequency spectrum. Hence, to accommodate the spectrum requirements for Smart Grid it will certainly be prudent for the utility to engage the Regulator to explore available alternatives; these may include the leasing of additional spectrum, or even the investigation of options to share spectrum with other users.

However, before these negotiations can take place, it will be advisable for utilities to conduct studies, possibly in conjunction with telecommunications service providers, to accurately determine the spectrum retirements and also to obtain a good insight regarding particular uses, e.g. mobile and/or fixed access.

The transition to Smart Grid does not replace the existing grid; rather it represents a significant revamping, using new sensing, measurement, control, and automation technologies – some of which are illustrated in Figure 2. 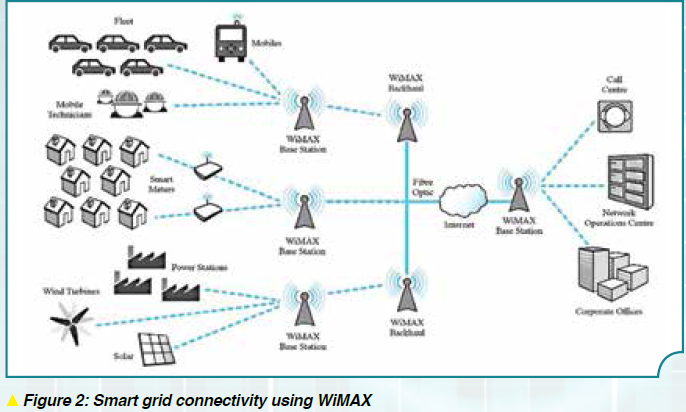 In general, technologies required to successfully implement the diverse necessities of Smart Grid will include the following:

As is the case with most new and innovative technological developments, Smart Grid is subject to a number of implementation issues as well as concerns and oppositions – typically those expressed by public consumer groups. The following represents a non-exhaustive list of current, more challenging topics.

There can be little doubt that significant costs will be incurred to implement pilot projects and this can, of course, serve as a major deterrent to acceptance and ultimate adoption by utilities and consumers alike. Cost sharing amongst stakeholders and potential beneficiaries could perchance help to alleviate this concern.

A typical Smart Grid system could incorporate millions of consumers and devices; hence, reliability and security is a crucial consideration. The prominence of information technology, as automation, remote monitoring/controlling and the interconnection of supervision entities increases, will quite likely introduce new cyber security vulnerabilities. Thus, mitigating security risks is arguably one of the most important research and development topics.

The Smart Meter, or AMI, is an integral component of any smart grid system and although the deployment of these devices has steadily increased in recent years, many utilities, both in the USA and Europe, still struggle to garner overall customer acceptance. The two primary concerns fuelling the opposition to these meters relate to health and data privacy issues.

Since smart meters typically employ wireless technologies to communicate information, exposure to radio frequency radiation, and possible carcinogenic effect normally attributed to cell phone usage, has become a serious concern for many customers. This is further exacerbated by the probable eventual incorporation of transmitting devices into all household appliances. Many eminent studies have shown that the levels of radiation emitted by Smart Grid transmitting devices are well below that which is considered harmful to mammalian life forms. Yet these perceptions persist and indeed form the mainstay of opposition held by many extremely vociferous consumer groups worldwide.

To mitigate the privacy concerns it is suggested that utilities educate customers regarding their privacy policies; specifically as to why their data may be shared, ways that they can access their data, and means by which complaints can be registered. In addition, an unambiguous publicly available policy can certainly alleviate some customer concerns, and will also help to create a more general acceptance of smart meter technology and the implementation thereof.

Early adoption of any cutting-edge technology, especially those that are propriety to a specific manufacturer, carries with it the risk of incompatibility and limited expansion and upgrade options. To effectively address this concern, it is imperative that interoperability standards and backward compatibility of technologies are incorporated into the development of new technologies.

The growth of electricity grids in the previous century has no doubt brought many socio-economic benefits for mankind as a whole. Unfortunately, the basic principles have changed very little since inception and most grids are still heavily dependent upon fossil fuels with consequent serious repercussions for the global environment. Worldwide demand for electrical energy is expected to rise 82% by 2030 (Energy Information Administration, US) and unless revolutionary new fuels are developed, this demand will be met primarily by building new coal, nuclear, and natural gas electricity generation plants. Not surprisingly, world CO2 emissions are estimated to rise by 59% by 2030 as a result.

Smart Grid represents an unprecedented opportunity to move the energy industry into a new era of reliability, availability and efficiency that can significantly contribute toward economic prosperity, address many environmental concerns and reduce overall consumption. Thus viewed at its highest level, Smart Grid can be understood as any and all technologies, standards and practices that contribute to a more efficient and more reliable power grid. Finally, the overarching goal of Smart Grid remains the enablement of greater consumer participation, and it is this aspect alone that can accomplish many of the superior goals and ideals of a Smart Grid system.

Acknowledgement: Article written and made available to ESI Africa for publication courtesy of the African Utilities Technology Council (AUTC). www.autc.biz