JSE-listed media and entertainment company, Times Media Group (TMG), has made a commitment to implement a variety of practical steps to reduce electricity consumption in support of the 49M campaign that encourages South Africans to embrace energy efficiency as a national culture and reduce the country’s electricity use. By signing the 49M pledge, TMG is demonstrating its commitment to energy efficiency and South Africa’s long-term sustainability, says Mike Robertson, managing director of Times Media.

Ierfaan Livingstone, TMG’s group facilities manager, says a number of initiatives have been implemented to reduce energy consumption in the business. TMG’s energy saving activities include replacing all 50 Watt down-lighters with LEDs, switching off office lights after hours, running the central air-conditioning system at half speed from 8PM to 7AM daily, and turning off escalators overnight between 6PM and 6AM on weekdays. The escalators do not run over weekends. Geyser thermostats have also been adjusted to supply lukewarm water only.

“We ensure all new stand-alone air conditioning units are eco-friendly and fitted with inverters to reduce power usage. We have two power correction systems in the building to further reduce energy usage during peak and off-peak periods. Furthermore, we have partnered with Energy Management SA Utility, who is busy with an audit of our building so we can retrofit the existing electrical system with low wattage bulbs, and LED fittings to qualify for an Eskom rebate,” says Livingstone.

Trevor Ormerod, general manager advertising sales and strategic communications at Times Media, believes the media has a duty to motivate and educate the public towards becoming energy-efficient in as many aspects of their lives as possible. TMG’s media assets include the influential Sunday Times, The Times, Sowetan, Business Day, Business Day TV and Financial Mail.

49M partners are encouraged to pass on the message about energy savings to key stakeholders including employees and suppliers. “Staff members are made aware of the initiatives that are being implemented. They are also educated through regular meetings as to how these efficiencies should be carried through to their homes, and how to spread the word with friends and family,” Livingstone concludes. 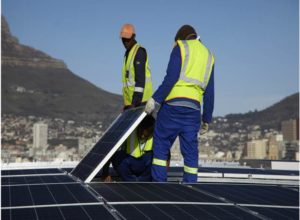