Introduction
The SADC region has been and continues to be plagued by power shortages as demand increased over the years and aging infrastructure not being able to meet the demand. In order to address the current power challenges, the Southern African Power Pool (SAPP) has a number of choices; (i) build new power stations, (ii) reduce demand growth, and (iii) manage the existing load by demand side management.

The first option is expensive and takes some time to be implemented. Not only is it expensive, finding sponsors for power projects is a difficult exercise. The second option will go against the regional desire to develop and achieve sustainable economic growths and reduce poverty for the majority of the people of the region. Reducing demand would imply closing some industry and this could lead to the laying off of people from employment. The SADC region needs to develop and catch up with the rest of the world and this option is not ideal for the region. The third option is very good in the interim and the short term period as the region mobilises funding for developing generating stations.

The aim of this paper is to explain what the SAPP has been doing in the implementation of a demand side management (DSM) programme for the SADC region. The concept of the Demand Side Management Power Station (DSMPS) has been developed by the SAPP. The idea is to first formulate regional specifications for DSM technologies to ensure that the region benefits as a whole and takes advantage of the economies of scale.

Four DSM technologies will be rolled out by the SAPP for implementation: Compact Florescent Lamps (CFLs), Commercial Lighting (CL), Hot Water Load Control (HWLC) and Solar Water Heaters (SWH). The first phase will be CFLs and the Business Case on CFLs has been finalised. The indications are that the SAPP will use 22 million CFL units in Year-1, 10 million in Year-2 and 9 million in Year-3. This will result in a saving of about 1,000MW in Year-1. The SAPP intends to install about 41 million CFLs in the next three years starting from 2009. The CFL unit is expected to contribute a cumulative 1600MW of load reduction. The plan is to save 1000 MW by the end of 2009 and 370 MW in 2010, 195 MW in 2011.

The next phase will be CFLs. Globally, lighting systems consume about 15% of the total electricity, and local research shows that residential lighting accounts for about 20% of the average home electricity bill. As part of the DSMPS, compact fluorescent lamps (CFLs) have been identified as the first unit to be commissioned. Compared to incandescent bulbs, CFLs can save up to 80% of electricity.

Expected Milestones
The proposed DSM power station units will be made up of DSM technologies rolled out as technology matures and enough verification methods developed. Initially, the first four units will be made up of CFL’s, Commercial Lighting (retrofits), Solar Water Heaters and Hot Water Load Control (HWLC), see Figure-1. With the exception of the HWLC units, the other units are aimed at hardwiring the energy savings into the grid. Switching from traditional light bulbs to CFLs is an effective, accessible change that SAPP can make to reduce energy use at home and prevent greenhouse gas emissions that contribute to global climate change. The CFL unit has been identified as the one with relative ease of implementation, as most SAPP member states already have experience with these. 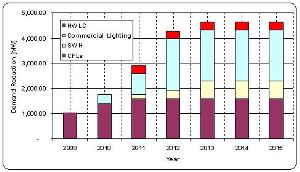 As is depicted in Figure-1, the SAPP is expected to save a total of 1,000MW in 2009 using only CFL technology. In 2010, commercial lighting technology will be employed and the savings is expected to reach 1,600MW. By 2011, with the implementation of the whole selected technologies, the savings will be as much as 3,000MW.

Implications of DSMPS
There are a number of issues that the SAPP would need to resolve in order to implement the DSMPS. The first one is cost to the utility in terms of revenue loss and implementation costs, the second is cost of the CFLs for the consumers and the third is appropriate tariffs to deter misuse of electricity.

Implications on Utilities
When demand is reduced on the grid, the implications for utilities are that revenues will be affected and will generally drop. Some kind of incentives to the utilities would be required to make the programme sustainable. The second implication is the cost of the CFLs. SAPP members intend to initially buy the units for customers and give them out and expect the customers at some stage to replace the CFL units when they are done. CFL units are generally more expensive than florescent bulbs and the tendency could be for the customers to go back to the florescent bulbs. Unless the cost of CFLs reduces drastically, there is danger of discontinuing on the part of customers. SAPP members are in the process of purchasing CFLs in bulk to reduce unit costs and also to develop capability for the manufacture of CFLs within the region.

Implications on Consumers
It is expected that when CFLs are installed, electricity bills will reduce. The challenge will be to replace the CFLs when they have been used. If the unit cost of CFLs could be reduced by mass production within the region, then cost savings could be realised by all customers.

Regional Tariffs
One of the reasons for non-control of electricity usage by customers is that the cost of electricity is low. This fact has been acknowledged by most Regulators in the region. For some time now, the Ministers responsible for energy in the SADC region has been contemplating the implementation of cost reflective tariffs and the adoption of regulatory principles that would enhance those tariffs. So far this has not been achieved in most member states. A number of studies have been done, but have not yielded the required results.

Environmental Concerns
While CFLs have many advantages over the traditional incandescent bulbs, concerns have been raised with regards to mercury contained in the bulbs. Environmental advantage of the CFL is that replacing a single incandescent bulb with CFL will keep half a tonne of Carbon Dioxide off the atmosphere over the lifetime of the bulb.  Saving electricity reduces carbon dioxide emissions, sulphur dioxide and high level nuclear waste. However the small amount of mercury contained in the bulb has led SAPP to investigate on ways of introducing CFLs in a manner that is not going to adversely affect the environment. When tubes are broken, the vapours are released. Mercury has a high, volatile highly toxic vapour. At high temperatures, mercury vaporises to form extremely toxic fumes. If inhaled, it may cause severe respiratory tract damage; symptoms include sore throat, coughing, pain, tightness in chest and much adverse impact on health. When the bulbs break, they should be collected in a sealed plastic bag and taken to a modern municipality landfill as hazardous waste. Bulbs from both industrial and domestic source should be crushed and sent to facilities capable of treating, recovering or recycling them. Incineration of used CFLs should be avoided at all costs as this practice tends to disperse the mercury into the atmosphere.

Way Forward for the Region
The short-term solution to the current power challenges in the SADC region is the development and implementation of DSM technologies. The easiest one to implement in CFLs. The challenge at the moment is the unit cost of CFLs compared to florescent bulbs. The region will have to work together to reduce the cost by bulk buying and also by developing manufacturing capabilities within the SADC region.

Conclusion
Test results so far are showing that DSMPS would be the best option for the SADC region in the interim to short-term period. The regional benefits of this intervention are evident. 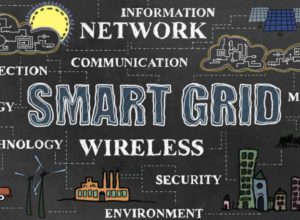