By
Jun 20, 2012
20 June 2012 – Greenhouse gas emissions increased in 2010 in the Euro zone, as a result of both economic recovery in many countries after the 2009 recession and a colder winter. Nonetheless, emissions growth was somewhat contained by continued strong growth in renewable energy sources. Figures from the greenhouse gas inventory published by the European Environment Agency (EEA) today confirm earlier EEA estimates.

The EU remains fully on track to meet its Kyoto target. The long-term reduction trend continued, since EU-27 greenhouse gas emissions still remained 15.4 % below 1990 levels in 2010. Emissions in the 15 member states with a common commitment under the Kyoto Protocol (EU-15) in 2010 were 11 % below the Kyoto Protocol base year. These consolidated figures confirm earlier estimates for the EU, published by the EEA in October 2011.

“Emissions increased in 2010. This rebound effect was expected as most of Europe came out of recession,” EEA executive director Jacqueline McGlade says. “However, the increase could have been even higher without the fast expansion of renewable energy generation in the EU.”

GHG emissions growth was contained by several factors. As in previous years the growth in the use of renewable energy sources continued in 2010 with a 12.7% increase of total consumption of energy from renewable sources. In addition, gas prices fell markedly in 2010 and EU total consumption of gas used for energy purposes went up by 7.4%. The higher share of gas led to an improved carbon intensity of fossil fuel consumption in many member states. 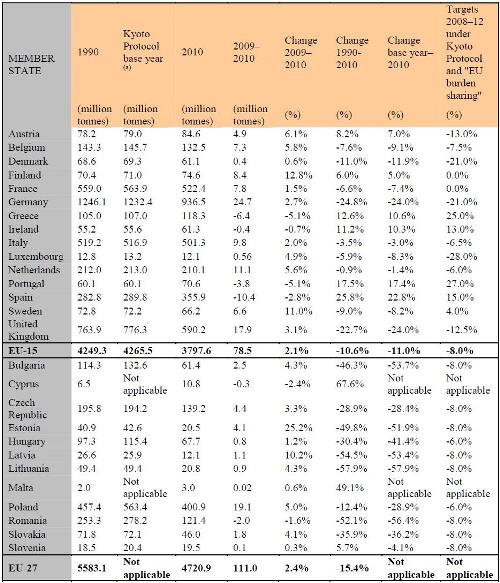 Early indications of 2011 figures
The most recent data available for the EU GHG inventory is for 2010. Verified 2011 emissions from the EU ETS point to a 2 % emissions decrease over the course of the year. In 2011 the EU ETS covered more than 12,000 power plants and manufacturing installations in the EU-27, Norway and Liechtenstein.