Last week, an Eskom official confirmed the parastatal was expecting the arrival of a GE Durathon storage battery within the next week to add to its existing lithium-ion phosphate battery at the utility’s large-scale energy storage test and demonstration facility in Rosherville, Johannesburg.

Peter Langley, senior consultant of Power Delivery and Utilisation at Eskom, addressed a group of renewable energy delegates at a conference in Cape Town where exploring the next generation of energy storage was on the agenda.

Also speaking at the event was Owen Lock, application manager at S&C Electric in Australia, who commented that energy storage is the answer and the solution needs to be put as close to the problem as possible.

One of the biggest challenges outside of Southern Africa is the lack of infrastructure, which cannot facilitate the distribution of generated power.

Solar expert Abraham Cambridge from DNV-GL commented that energy storage is immediate, one does not have to wait years for a plant to be built. Should the event of load-shedding occur, the stored energy is always there where as gas cuts off when the system shuts down.

Although the ideal of a co-generated energy storage system is grand in theory, “the elephant in the room is that we would still be burning fossil fuels”, Owen Lock commented.

Camco will fit its Red T Energy Storage, which includes solar PV, at Johannesburg’s Thaba Eco Hotel to boost its existing weak grid connection and reduce its dependency on a back-up diesel generator.

The 180kWh technology system will be used in conjunction with a 100kW solar PV installation and an existing diesel generator, Camco said in a company statement.

The system is expected to save the hotel up to 175MWh of power annually, the same amount of power that would have been generated by back-up gensets or consumed by the main power grid.

The project financing of $429,152 was provided by Energy and Environmental Partnership for Southern and East Africa, the Ministry for Foreign Affairs of Finland, the Austrian Development Agency and the UK Department for International Development. 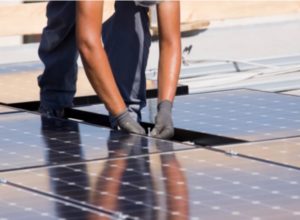 What does a solar PV GreenCard mean for your installation?