The message is clear: the global business of energy and power is under attack from an inanimate, unremorseful fourth industrial revolution (4IR).

The conversation now is how to make the transition to a ‘smart energy’ future without closing the door entirely on existing infrastructure and utility models. For the African market, this strategic conversation makes a slight detour to address the imperative question of how to take up the opportunity in order to leapfrog grid-tied models. Instead, Africa’s entrepreneurs, global companies with an African footprint, and governments are addressing this energy shift to facilitate a new type of gridless community.

This Ed’s Letter first appeared in ESI Africa Edition 4, 2018. You can read the full digital magazine here or subscribe here to receive a print copy.

The distributed renewable energy (DRE) market boom has emerged as a faster, more agile and more affordable option to drive energy access to the continent’s off-grid population. This is particularly true of Nigeria, which is still an energy poor country, despite massive historical investments in its electricity sector, according to Power For All (see page 34). From solar lamps to full renewable energy mini-grid applications, the tide in investment flow for the Nigerian off-grid DRE market is rising, even though it is barely matching the growing energy demand.

An interesting scenario is playing out in this West African market; along with the DRE boom, regulation is firmly addressing increasing generation capacity, grid resilience and the distribution companies’ ability to provide a service on which citizens can rely.

One of the major forces behind this 4IR is climate change and the enormity of the consequences should the generation, and use, of energy not make a transition to reduce greenhouse gas emissions. The main elements that we have control over in order to keep emissions in check are: concentrating our efforts on low-carbon energy production; building modular power plants within close proximity to end users; exploring energy sharing between hundreds of micro-generators; and promoting energy efficiency along with new models of energy consumption.

In South Africa, the municipal utility services industry – along with metros and large cities – has taken cognisance of the impact of digitalisation, decarbonisation, decentralisation and democratisation on its current revenue drivers and market relevance to end users. For this edition, we spoke with the incoming President and new Vice President Elect of the Association of Municipal Electricity Utilities (AMEU) to learn more about the trends shaping the sector (see page 37).

The overarching tone is that the industry must explore new revenue streams to brace itself against the tide of digital disruptors and distributed generation growth. Many municipalities have already marched ahead on this path by incorporating two-way communication and self-healing properties in the technology they deploy.

Others have taken tentative steps to become network providers as opposed to strictly electricity distributors. In this model, end users are charged a fixed service fee along with their usage payment. According to the City of Cape Town’s mayoral committee member for finance, Johan van der Merwe, there has been a reduction in income as a result of residents using less water during the City’s drought, as well as many households reducing their energy consumption through energy saving initiatives.

“The City makes no profit from the sale of electricity, water, sanitation provision or from rates income.  Whether you use more or less, it costs the City the same to provide it,” explains Van der Merwe.

Jayshree Pershad, AMEU Vice President Elect, suggests that another looming challenge is the incorporation of digitalisation, where customers – especially millennials – demand access to information. She advises municipalities to embrace the digital era to improve service delivery and standards to ensure customer satisfaction.

One solution is the use of Chatbot technology coupled with smart metering data, enabling utilities to fully automate customer service (see page 42). There is a plethora of technology, business strategies and new financing avenues to explore within the pages of this edition, which I trust will deliver the information you need to fully embrace the 4IR. Until the next edition.

This Ed’s Letter first appeared in ESI Africa Edition 4, 2018. You can read the full digital magazine here or subscribe here to receive a print copy. 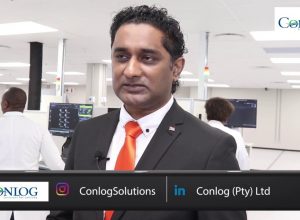 A look inside the jewel of Conlog’s new manufacturing facility