Petroleum giant, Shell, will offload the last of its Nigerian assets in an effort to move towards cleaner energy.

Shell’s divestment could deal a fresh blow to the fiscal plans of the Nigerian government, about 90% of whose revenue comes from oil, as it rebalances from the oil crash of 2020.

Royal Dutch Shell will offload the last of its Nigerian assets in a move to rein back risks including sabotage, theft and litigation with host communities in Africa’s largest oil producer, and commit its future to cleaner energy elsewhere, the oil super-major said.

Have you read?
Shell Foundation and DFC collaborating to accelerate energy access

But the government wants Shell, with which it runs a joint venture vehicle called Shell Petroleum Development Company (SPDC), to at least retain onshore operations for now rather than undertake a complete exit from the country.

“Nigeria is in its talks with Shell include handing over Shell’s stakes in the assets to the Nigerian Petroleum Development Company…. inviting bids from Nigerian indigenous producers, or having a mixture of local firms and foreign independent producers to bid for the assets,” Minister of Petroleum and Natural Resources Timipre Sylva told journalists in Abuja.

Getting to a point “where Shell has completely divested from a sector is not good for us,” he added.

The company, which holds a 30% in SPDC, translating to 156,000 barrels per day in 2020, has sold nearly half of its Nigerian investments in the past 10 years and considers its Nigerian operation a “headache” on account of endless litigation arising from oil spills.

Have you read?
Angola: Training opportunities in oil and gas sector expanding

Shell is Nigeria’s biggest oil producer, accounting for around 40% of the West African country’s total crude and condensate output capacity of 2.2 million barrels per day. The divestment could have a big impact on the OPEC member’s oil output, according to energy industry watcher S&P Global Platts.

Ben van Beurden, Shell CEO, hinted at the energy giant’s resolve to put the stormy days behind it at all costs during its recent annual general meeting, according to Reuters.

“We cannot solve community problems in the Niger Delta, that’s for the Nigerian government perhaps to solve. We can do our best, but at some point in time, we also have to conclude that this is an exposure that doesn’t fit with our risk appetite anymore,” he said.

“We have drawn that conclusion, and we are now talking to the Nigerian government on the way forward.” 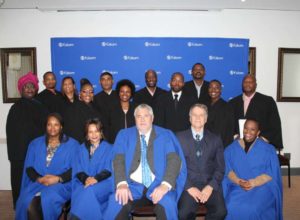