The Namibia Red Cross Society with support from the European Union (EU) has launched a renewable energy initiative at Muyako village, in efforts to mitigate climate change.

According to the Namibian, Zambezi Red Cross board chairperson Innocent Mahoto said the project aims to promote the use of various forms of renewable energy and energy efficient technologies in 10 selected rural communities of the Zambezi, Kavango East and Kavango West regions.

“Selected small-scale farmers of which most are in off-grid electricity areas will benefit from the installation of renewable energy in community gardens that will facilitate a responsible and environmentally friendly use of resources,” said Mahoto.

The project, which started in March 2017 and ends February 2019, aims to raise awareness on renewable energy and energy efficient technologies, and the setting up of solar pumping systems in the agricultural production.

Namibia has been reported to be highly vulnerable to impacts of climate change due to its geographic location, its variable weather patterns and a number of socio-economic factors. Read more: MIGA helps secure long-term financing for solar power

“The project will facilitate the construction of 200 energy-saving cooking stoves, as you know climate change is real. We need to ensure that we reduce the cutting down of trees for firewood. It will also distribute solar lamps to 200 families, which will reduce paraffin usage and help reduce the effects of climate change, as well as indoor pollution,” he said.

Mahoto further stated that they will also install energy-efficient irrigation water pumps, which will replace the diesel-powered boreholes, in order to promote the use of solar-powered boreholes.

“Capacity-building on renewable energy and energy-efficiency is important. So, we are going to work with the communities to ensure that they have relevant information on climate change to enable them to make informed decisions,” he added.

The EU’s head of delegation to Namibia, Achim Scaffert, disclosed that in the current cooperation framework ending in 2020, the EU has already committed €68 million ($84 million) to support various projects and programmes in the country.

“Our ambition in the Namibian context of this action is to support government’s efforts to reduce the vulnerability of the rural population to adverse impacts of climate change through developing, testing and disseminating solutions and practices, implementing innovative technologies for climate change adaptation and mitigation in rural areas,” Scaffert said. 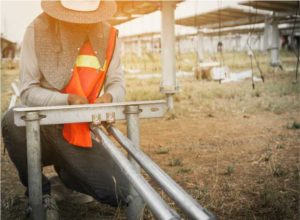