Noting the impact of the COVID-19 pandemic on the county’s economy, Eskom’s group chief executive, André de Ruyter, says “as Eskom, we understand that we have a critical role to play in enabling South Africa’s economic recovery efforts, for without reliable electricity, there can be no sustainable economic recovery”.

De Ruyter was speaking at the Joburg Indaba mining conference. In his key note address, he took the opportunity to outline the power utility’s current strategy and future plans.

Plans are in place to enable Eskom to achieve operational stability and, subsequently, significantly reduce the risk of loadshedding, according to de Ruyter. These stem from utility’s Maintenance Recovery Project, which aims to spur midlife refurbishment and conduct reliability maintenance to improve the energy availability factor, he stated.

The Eskom chief executive expressed confidence that by April 2021, South Africans shall see the first benefits of the enhanced maintenance, and that by September, Eskom would “have significantly reduced, but not eliminated, the risk of loadshedding”.

However, these efforts – to refurbish and maintain the plant and improve the level of performance and reliability – on the part of Eskom by itself are not enough to end loadshedding, de Ruyter admitted.

He further noted that as a start, a stable supply system on its own brings confidence for business to start investing in new opportunities and the expansion of existing ones, which increases demand and further puts pressure on the infrastructure.

“South Africa needs additional generation capacity to serve existing demand, and to cater for a growing economy. And we need that additional capacity sooner rather than later,” he said.

He continued: “Eskom was therefore very pleased to note the concurrence of NERSA with the Department of Mineral Resources and Energy’s ministerial determination for the procurement of an additional 11,873MW of infrastructure over the years to 2030. We also note the ongoing progress in the emergency procurement of another 2,000MW of generation capacity, and look forward to continued rapid progress in this regard.”

De Ruyter says Eskom is looking forward to collaborating with the Department of Mineral Resources and Energy as well the IPP Office to enable an accelerated execution to bring additional capacity onto the grid in the shortest space of time possible. Early alignment and consultation are sure to result in more favourable and predictable outcomes.

He stated that Eskom’s revenue challenges are the result of lower sales volumes, which have “seen an annual decline of 1% (for approximately the past 10 years), as well as the non-cost-reflective tariff increases granted by NERSA. Without cost-reflective tariffs, our business efficiency efforts will be of short-term benefit. Eskom has, thus, reviewed various revenue decisions by NERSA through the High Court”.

He continued: “Unfortunately, this has been the only course of action available to a licensed entity in reviewing a revenue decision. Eskom does not want to be in court with its regulator, and looks forward to the appropriate legislative changes to allow for a less adversarial approach to resolving our differences.

“As we appeal for cost-reflective tariffs, we also have an obligation to manage our costs properly and in a disciplined manner. We therefore don’t ask for tariffs to subsidise our inefficiencies – we ask for tariffs that reflect reasonably incurred costs.”

He said the company has started a process of renegotiating coal contracts where the suppliers’ profit margins are above the market norm. The savings potential from the renegotiation initiative will be quantified once the negotiations have been completed, he explained.

De Ruyter also noted that the debt owed to Eskom by municipalities is an undisputed threat to the company’s financial sustainability. As at the end of August 2020, the arrear debt by municipalities was at R31.4 billion.

The Eskom’s chief executive said they are committed to ongoing engagements with government and various stakeholders to find a sustainable solution to this problem. “The support that we have had from the Political Task Team led by the Deputy President has been instrumental in enabling us to carry out this work with resolve,” he said.

According to de Ruyter, Just Energy Transition (JET) is among a range of actions taken to mitigate the need for fiscal support dependency in the future.

“While contributing to the country’s energy mix, the JET will create innovative and forward thinking revenue streams which will further assist us in optimising our balance sheet. Eskom is the first SA business to establish a JET office to drive this catalytic intervention.

“JET is but one intervention to capitalise on the groundswell for green financing, and Eskom has received a number of firm indications of support from international and local developmental financial institutions who are interested in enabling a just transition to a lower carbon future,” he stated.

De Ruyter also revealed that management has embarked on a decisive journey towards restructuring Eskom into Generation, Distribution, and Transmission, with divisionalisation as the first step.

He said notable progress has been made on the 2019/20 targets of this crucial phase towards the legal separation of Eskom’s three main businesses, in line with government’s Roadmap for Eskom in a Reformed Electricity Supply Industry, released in October 2019.

“We are also accelerating our efforts to establish a separate legal entity for Transmission, and have approached DPE and National Treasury for the necessary approvals under the PFMA to create a new wholly-owned subsidiary under Eskom Holdings SOC for this purpose,” said de Ruyter. 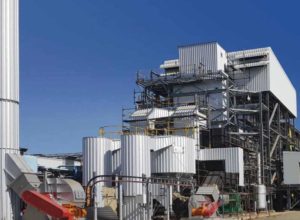