“The Continental Free Trade Area will stimulate intra-African trade by up to $35 billion per year, creating a 52% increase in trade by 2022; and a vital $10 billion decrease in imports from outside Africa,” said Akinwumi Adesina, President of the African Development Bank.

Through the African Continental Free Trade Area, many African countries are committing to remove barriers to trade, like tariffs and import quotas, allowing the free flow of goods and services between its members.

To accelerate trade facilitation, the Bank has invested more than $20 million over the past five years in trade agreement support, along with cross-border transport, energy soft infrastructure, and is committing to support the building of the institutional and human capacities of the Continental Free Trade Area Secretariat.

“Free trade will bring collective benefits and shared wealth for all African nations, especially the landlocked countries. So, we must accelerate investments in regional and national infrastructure, especially, to boost connectivity, reduce costs and raise competitiveness,” Adesina said.

He applauded the African Union Commission, the Economic Commission for Africa, the negotiators, and the Continental Free Trade Area (CFTA) Champion, Mahamadou Issoufou, the President of the Republic of Niger, for doing an excellent job in making the initiative a reality for Africa.

Adesina further noted that regional integration and trade based upon the free movement of persons, goods, services and capital is at the core of the business of the Bank.

The Bank is accelerating the full implementation of the High 5s – its five development priorities, in particular ‘Integrate Africa’. Read more: Politics, if ignored, can put your electricity supply markets in peril

Calling on investors not aid

“This is Africa’s time and Africa can no longer be ignored. Africa’s food and agriculture market will hit $1 trillion by 2030. Household consumption will hit $2.5 trillion, with business-to-business expenditure at $3.5 trillion by 2025. There’s no doubt, Africa is where to invest,” Adesina stressed.

According to the Bank’s president, infrastructure features prominently in the Bank’s High 5 priorities to ensure that no country is left behind in its efforts connect Africa’s 54 countries into a mutually profitable free trade area.

“Africa is open for business. The days of aid are over. We are now on a highway to boosting Africa’s prosperity, through greater trade and investments ‘without borders’ among our nations,” he said.

Through the African Continental Free Trade Area, many African countries are committing to remove barriers to trade, like tariffs and import quotas, allowing the free flow of goods and services between its members. 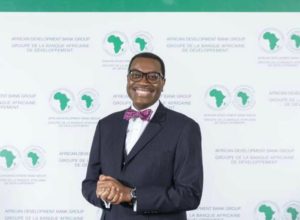 Adesina says Africa must build back boldly and smartly