More than half of the world’s energy will come from petrol and natural gas in the year 2040, according to the BP Energy Outlook 2018 report.

Released earlier this year, BP’s group chief economist, Spencer Dale, commented on the report’s findings: “We are seeing growing competition between different energy sources, driven by abundant energy supplies, and continued improvements in energy efficiency. As the world learns to do more with less, demand for energy will be met by the most diverse fuels mix we have ever seen.”

The report focusing on future energy trends was discussed at the 3rd World Energy Talks, organised by the Turkish member committee of the World Energy Council and BP at Ankara Sheraton Hotel, with a strong focus on the global energy consumption by 2040.

Electricity in an evolving transition

According to the BP Energy Outlook 2018 report, electricity constitutes 70% of the energy demand increase. The report measures the penetration of electricity into the transportation sector by taking into consideration both the number of electric vehicles (EVs) and the utilisation rate of each vehicle.

As claimed by the Evolving Transition Scenario, the EV’s share in the global automobile market will reach 15% by 2040.

Alparslan Bayraktar, president of the Turkish member committee, commented: “An integrated, comprehensive approach is essential to the energy sector.”

He emphasised the importance of medium- and long-term planning, as well as of an integrated and comprehensive approach in the energy sector.

“Essential elements of success in energy policies are continuity, definitiveness and predictability in political aims. I would like to state that the vision we have created under the National Energy and Mineral Policy of the last term will continue as powerfully in the new term,” he said.

Bayraktar added: “Fifteen years ago, Turkey took a critical decision to liberalise its energy markets and successfully completed the transformation. While planning and an integrated approach are paramount for our private sector stakeholders, the government must provide the flexibility required by the changes needed by the market.” Read the report here

Renewable energy – which is expected to grow over 400% and amount to more than 50% of the total energy production increase – is another conspicuous subject in the scenario, reported the World Energy Council.

Even though electricity is one of the energy types that will show a substantial increase, the experts expect that petrol and natural gas will continue to constitute more than half of the world energy.

According to the transformation scenario in progress, carbon emission levels will show a 10% increase until 2040 due to the increased demand and consumption of energy.

The BP Energy Outlook 2018 report also investigates another scenario of “Faster Transformation” where the carbon emission levels decrease by 50% by the year 2040.

Mick Stump, president of BP Turkey, commented: “The demand will continue to grow, and until 2040 the global energy demand will increase by one-third.”

Turkey, as one of the fastest growing 20 economies of the world, is at the focal point of the world’s attention with its natural gas projects, one of the most important energy sources of the future. Read more: Op-Ed: Africa’s high-tech path to energy inclusion 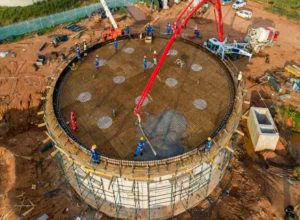