The president of the African Development Bank, Akinwumi Adesina, attended a G7 Summit session where he presented the Affirmative Finance Action for Women in Africa (AFAWA) initiative to the press, alongside French President Macron.

The pan-African AFAWA initiative was launched in May 2016 at the Annual Meetings of the African Development Bank, held in Lusaka, Zambia. It has the twin objectives of bridging the funding gap faced by women in Africa and of liberating women’s entrepreneurship capacity, the Bank said in a statement.

Speaking in the presence of Beninese singer and UNICEF ambassador Angélique Kidjo, Adesina said in a statement of active support: “Investing in women’s entrepreneurship is not just a good idea; it also makes economic sense.”

This press briefing forms part of a summit centred on reducing inequality, a renewed partnership with Africa and the creation of sustainable jobs and support for entrepreneurship, especially for women. France, which holds the presidency of the G7 in 2019, wants to make gender equality, a major theme of President Emmanuel Macron’s five-year term, a global cause.

AFAWA takes a holistic approach based on boosting access to finance for women-owned and women-led businesses; strengthening the capacity of women entrepreneurs and financial institutions; and mobilising and supporting African governments to enact the legal, political and regulatory reforms needed for the development of women’s entrepreneurship.

Adesina is also scheduled to attend a G7 session on Monday devoted to climate, biodiversity and oceans, as part of the fight against global warming.

This year’s G7 Summit has a new format: at the initiative of President Macron, eight non-G7 countries are invited, five of which are African, the full list being Australia, Burkina Faso, Chile, Egypt, India, Rwanda, Senegal and South Africa.

The G7 Summit, or ‘Group of Seven’, meets each year, bringing together the heads of state and government of Canada, France, Germany, Italy, Japan, the United Kingdom and the United States, plus the presidents of the European Commission and European Council.

In 1997, the group included Russia, becoming the G8, but after the annexation of Crimea by Russia in 2014, the member states of the G7 and the European Union suspended Russia from the group. 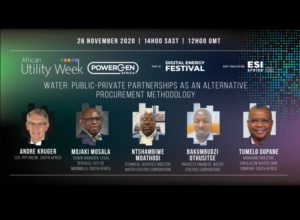