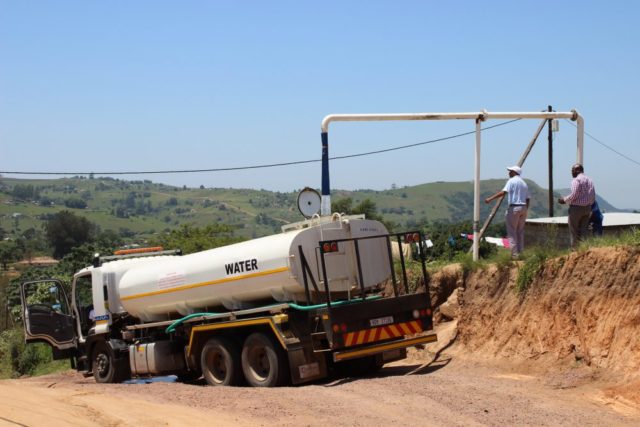 The project was initiated after the water from two boreholes namely ND64 & ND65 were tested and found to have high levels of iron, fluorides and manganese.

It was further found that there is a high cost associated with supplying water to the local community via water tankers.

In 2013 EWS appointed Veolia to design, build, install and operate and maintain (for a four month period) a nanofiltration membrane water treatment plant.

Design for the plant began in April 2015 with construction starting in May 2016. The operation and maintenance phase commenced in October 2016.

Currently the project is in the final month of the operation and maintenance phase and will be handed over to EWS in early February 2017.

The plant has been installed on E5 reservoir site and designed to treat the water from the two boreholes to potable water standards before being distributed to the local community via the water distribution network.

The plant is designed to operate for 10 hours per day treating 100kl of raw water with a 20% rejection rate, therefore the plant is capable of producing 80kl of potable water.

The plant is currently producing 60kl/day of potable water due to pumping restrictions on the borehole pumps which limits the amount of raw water the plant receives.

This project has faced many challenges which has been overcome by the individuals from various departments working together to ensure that this project is a success.

The project team has shown a high degree of professionalism, hard work and dedication which ensured the project is a success.