Who were your role models during the pivotal stages of your life?

Growing up, my father, who was both political and a businessman as well as a paramount chief, was a solid figure in building my character. My uncle, who was a medical doctor, also played a pivotal part in shaping who I am today. During my post-graduate studies, I started admiring successful leaders including Martin Luther King, Mahatma Gandhi, and American titans of business and technology. In my later years, I took lessons from the likes of Kofi Annan, Nelson Mandela and other African leaders who transformed their countries.

What are your top attributes of a successful leader?
In my view, a successful leader is one who has: 1. The ability to set concrete goals, targets and timelines. 2. A deep passion and determination to pursue a set of aspirations, goals and objectives. 3. The willingness to listen to and learn from others who have succeeded – through a display of empathy for others and who can implement coping mechanisms during challenging times. 4. Spiritual strength, faith and the grace of the Almighty.

From a global perspective, who inspires you in the power sector?
Tesla founder Elon Musk and the late Steve Jobs, founder and former CEO of Apple – they are both among the greatest inventors the world has seen in the last four decades. They have stood true to their beliefs and persevered despite any negativity that may have surrounded their ideas. Musk has created two disruptive technologies – the innovative battery system and the electric car – these revolutionise not only how energy is stored, but also ensure flexible integration of renewable energy into the grid.

Steve Jobs and his Apple technology products, which simultaneously changed mobile telephony, the music industry and personal computing, have launched the internet of things and digitisation.

What leadership qualities are lacking in the African power sector and how can this be overcome?
Currently there is a lack of bold vision, deep energy sector reforms and deregulation of the sector. There is a lack of creativity to adapt and deploy feasible business models, which have been successful in similar developing nations in Asia and Latin America. To this end, this ‘vision’ lacks strong political leadership to make the necessary difficult decisions to implement and execute the business models. I am committed to continuously inspire my team to fulfil their full potential.

What is the one thing in your opinion that people commonly misconceive about your character?
Well, people often misconceive my confidence for arrogance, and a determination to achieve results for over-ambition. They misunderstand a bold vision, as being overly ambitious. In the Sierra Leonean context, people misunderstand my ideas as being somewhat elitist.

How do you motivate a team after experiencing a defeat at a time of low energy and enthusiasm?
The first step is to analyse issues objectively and understand the reason for the experienced failure. Once the reason has been identified, I re-state what has been achieved so far and simplify the reasons for failure so that the team members understand and believe that the experienced challenges can be overcome.

In the short-medium term what do you foresee for Africa’s power future?
It is fair to say that within the next two years, we urgently need to see robust energy sector-reform. In 5-10 years, the African power sector will need to double its current electricity generation capacity. In the long-term, Africa will need to embrace the green energy revolution and combine it with the digital revolution in order to become a key player in the future global green economy.

Is there an increased need for sector crossover and are we seeing enough of this in Africa?
There is definitely a crucial need for sector crossover. However, I prefer to use the term ‘integrated, holistic energy planning’ – this means that our energy policies must be linked to efforts focused on expanding Africa’s productive capacity whether in mining, agriculture or other major investment strategies. The critical links between energy and health, energy, water and food security, and energy and women’s development, must also receive special attention.

As the UN Secretary General, Ban Ki-moon has said: “Energy is the golden thread that connects economic growth, increased social equity and an environment that allows the world to thrive. Unfortunately, this holistic planning integration has not started yet in most of sub-Saharan Africa.”

How important is bilateral trade between Africa and foreign countries?
In my view, rapid economic growth, wealth creation and expanded youth employment requires Africa to play a major role in the production and export of higher value manufactured products. Such trade relations must include trade with OECD (Organisation for Economic Co-operation and Development) countries as well as South-to-South trade and cooperation.

Are there any achievements/challenges that your country of residence has experienced across the power value chain?
In Sierra Leone, we are very pleased to see the launch of the renewable energy policy and the major investment of £35 million by DFID into distributed, community-based energy systems. Similar investments are also being made by USAID and China into renewable energy. I am very proud that a small 3-5MW hydropower project, Bankasoka, that I personally helped to develop in the NorthCentral part of the country, is officially up and running.

The Bankasoka hydropower project further demonstrates the value of harnessing all forms of renewable energy in order to meet Sierra Leone’s target of universal access to energy within the next two decades.

What values do you demonstrate as a leader?
I continue to seek out and drive optimal performance and success amongst my team and each team member. I am committed to continuously inspire my team to fulfil their full potential, while making a solid commitment to results-based management.

What is your greatest weakness and your greatest strength?
That is simple! My greatest weakness is my inability to learn a foreign language. My greatest strength is the ability to translate a complex vision or goal into a set of simple, comprehensible and marketable ideas that people strongly believe in and adopt as their own. Energy is the golden thread that connects economic growth, increased social equity and an environment that allows the world to thrive.

This interview is exclusive to The African Power Elites: Projects and People 2017 publication, available for download on esiafrica.wpengine.com. 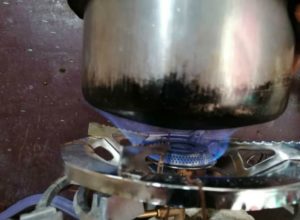