“We truly believe that nuclear is the answer to providing reliable, clean, safe and affordable base load power”

Mr Polikarpov, thank you for your time. Let’s start with the company Rosatom.  What are the accomplishments of this company that you are most proud of?

What is your view are the main reasons for the company’s success?

One of the main reasons is the fact that Rosatom has shifted its approach on the international market. Rosatom wants to provide its customers for the construction and operation of nuclear power plants with the most competitive, most effective, most efficient solutions, we don’t just want this, it’s a part of our global strategy. We aim to provide the most efficient solution to reduce the cost of producing one KWh of electricity. The fact that the company is vertically integrated means we are able to control all aspects of the value chain and allows us to do this.

ROSATOM is the only company in the world able to offer the complete nuclear power cycle, which ranges from the nuclear fuel supply to nuclear power plant (NPP) construction and operation, and from nuclear medicine to reprocessing of spent fuel, as well as technologies for the safe storage of nuclear waste and finally the decommissioning of NPPs.

The company also takes great care when approaching potential markets, we do the necessary research to best understand the market and the challenges that face that particular market. Not to forget our technology, which ranks among the most sophisticated in the world, our VVER reactor for instance is among the world’s most widely-used reactors.

VVER plants have proved their reliability over more than 1400 reactor years of operation. Since the commissioning of the first VVER power unit in the 1960s, the technology has been providing safe and affordable electricity throughout the world, from Armenian mountains to the countryside of the Czech Republic, above the Arctic Circle and at the southern tip of India.

How important is Africa as a new market for you?

Africa is an extremely important sector for Rosatom and we place great emphasis on our operations on the continent. Africa really is the final frontier, it is the last booming economy, and it is currently the fastest growing economy, with a regional growth of 5.7% per annum, the future of the world depends on Africa.

But like any growing economy, Africa is not without its problems and is currently facing a number of grave challenges. Arguably the largest of these challenges being electricity, the latest World Bank statistics have revealed that 25 of the 54 nations on the continent are currently in the midst of an energy crisis.

Africa is a resource rich continent and a number of African leaders have realised that in order to grow their economies they need to beneficiate their resources themselves, rather than export them as raw materials, this cannot be done without sufficient base load electricity. A number of African nations are also very rich in uranium resources and this could be used to more than adequately run the country on nuclear power and even opens up the opportunity to export power to neighbouring countries.

In order for Africa to continue and even increase its current growth potential, it is clear that it needs a reliable and affordable source of base load power to stimulate industrial activities and bolster economic growth.

Many African nations are reliant on their water resources to generate this base load but have realised that this could be rather risky given the current climate changes and water shortages, those without hydrocarbons do not have any other viable option, besides nuclear. We truly believe that nuclear is the answer to providing this base load power, as it is reliable, clean, safe and affordable. 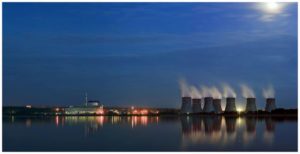 How do you view South Africa’s track record thus far in the nuclear field?

South Africa has a fantastic track record when it comes to nuclear, it is one of the oldest nuclear nations and a founder member of the International Atomic Energy Agency (IAEA).

The country has successfully been operating Koeberg for over 30 years and Safari 1 reactor for 50 years. Let us not forget that Safari 1 reactor is one of the most efficiently run reactors of its type in the world today and supplies medical isotopes to over 60 countries. Between eight- and ten-million medical procedures across the globe are carried out using radioisotopes produced by SAFARI-1, saving millions of lives.

The country has a very proficient regulatory body in terms of the National Nuclear Regulator and also has some of the best nuclear physicists and engineers in the world. This said, South Africa is more than capable of embarking on its upcoming nuclear journey and to once again be at the forefront of innovation and technology in Africa.

How important is it for Rosatom to be successful in South Africa?

It is worth noting that there has already been a good track record of cooperation between Russian and South African experts in various nuclear areas, including enriched uranium supplies, cooperation in the frames of the PBMR project and isotope production.

We are ready to cooperate with local companies to revitalise the entire nuclear industry in South Africa, to develop a full-scale nuclear cluster of world class standards, from the front-end of nuclear fuel cycle up to the engineering and manufacturing of complex power equipment and in doing so, create reliable partners that can assist us in achieving our ambitions further up in Africa. South Africa has the infrastructure, technical capabilities and legislation in place for this to become a reality now.

Renewables and clean energy are popular trends now in the power industry worldwide.  Can nuclear fit into this way of thinking?

Most certainly, nuclear reactors emit no greenhouse gasses during operation.  Over their full lifetimes, they result in comparable emissions to renewable forms of energy such as wind and solar.  Nuclear energy requires far less land use than most other forms of energy, especially renewables.

Over the past couple decades nuclear energy has saved the environment from countless CO2 emissions had the equivalent power been produced by fossil fuels, by way of example, if Koeberg were a coal-fired plant, it would use six train loads of coal per day, but in fact it uses only one truck load of nuclear fuel per year. Nuclear is not against renewable energy in any way but it is extremely important to take into consideration that  every country needs an energy mix and in this mix it is vital to have a source of energy that can provide base load power as and when it is needed.

The Republic of South Africa has remarkable geographic and climatic features that allow actively developing solar, wind and tidal energy, which could be a good solution for many small households and farms.

Industrial use of these sources is difficult due to the low volume and at the moment lack of solutions for energy storage, which means that a plant can operate only under certain circumstances and thus high power requires significant space. Thus, the construction of a 4 GW wind power plant requires the area equal to 207,925 football fields. The construction of a nuclear power plant of similar capacity requires an area equal to just 387 football fields.

Why did Rosatom decide to join African Utility Week in 2016?

We took part in Africa Utility Week in 2015 and the event proved to be a very efficient foundation for open and professional dialogue about the energy options available for the African continent. We see this conference as the ideal opportunity to spread the good word of nuclear. We aim to use the platform to educate South Africans on the importance of low carbon base load power.

There is unfortunately a number of misconceptions surrounding nuclear that often makes it very difficult to communicate the good stories and the great achievements from our industry. The nuclear industry should be celebrated for its grand achievement of bettering the lives of millions of people across the globe, rather than frowned upon for the simple reason of not being fully understood.

What will you be displaying?

We will be displaying our VVER technology and highlighting our integrated solution. We also will continue promoting our thermal power capabilities which were first presented to public in July 2015.

Will you have a specific message at the event?

Nuclear energy is the way forward, to a world in which every person has access to electricity and therefore a better standard of living but not at the cost of the planet.