Stephan Woodborne, lead research Professor at the University of Pretoria says that sustainable economic growth is a tightrope act that balances the benefits of job creation and associated improvements in quality of life against the environmental impacts such as El Niño, on ecosystem services. Woodborne discusses his team’s ongoing research with ESI Africa, where he highlights that one of these improvements is water supply.

Today unfortunately water is a commodity that is not spatially distributed to conveniently match the local demand. Economic growth will cause increased domestic use as populations urbanise, increased demand from agriculture to feed the population, demands from industry including power generation, and in the case of South Africa there is also the unique situation of managing rivers that cross our borders into neighbouring countries such as Mozambique.

The management of water is done at a very high level in government, but while this may be the case there is little that can be done to mitigate the basic supply problem associated with droughts.

The summer drought of 2015/2016, was driven by a phenomenon known as El Niño. The impact of anomalous sea-surface temperatures in the eastern Pacific Ocean affects atmospheric circulation around the world, and in southern Africa the consequence is drought. The current state of the drought is devastating: the primary water supply dam for Gauteng, the Vaal Dam, is 37.5% full at the time of writing.

It is half as full as it was last year at this time, and the level teeters on the classification between ‘low’ and ‘very low’ (https://www.dwa.gov.za/hydrology/weekly/percentile.aspx?station=%20C1R001). Other dams in Mpumalanga and Limpopo Provinces are also desperately low. But how bad is the situation and what can we expect in the future?

The El Niño of 2015/2016 had an indexed maximum strength of 2.95 (just go with the numbers – it will become clear as the story unfolds) according to the Climate Explorer database.

Researcher Jinbao Li (University of Hawaii) and co-authors published a 1,100 year reconstruction of El Niño in the journal ‘Nature Climate Change’, and not once in the last Millennium was there an El Niño as strong as the one we are experiencing.

Let us be a little more pragmatic as the analysis by Li et al. is based on annual tree-rings. If the average annual state of the 2015/2016 El Niño is calculated instead of its maximum strength it indexes at 1.58.

That is still stronger than any annual value in the Climate Explorer database for the last 170 years, indeed on only 22 occasions has this happened in the last 1,100 years.

The good news is that computer simulations forecast that the El Niño will ease to an index score of somewhere between -05 to -1 indicating La Niña conditions, and hopefully a break in the drought.

However, the El Niño phenomenon is notoriously fickle and these forecasts are probabilistic statements.

Before we get too optimistic lets take another look at the 1,100-year record. We can analyse what has happened after strong El Niños in the past, and even if this is not an indication of what might happen in the next year (although who knows, maybe it does), it presents a scenario that water resource managers should heed.

Of the 22 years in the last 1,100 that had El Niño conditions as strong as 2015/2016, less than 1-in-5 of them were followed by La Niña conditions, while 1-in-3 were followed by El Niño conditions again (the rest were kind of neutral years). Of those doublets, four of the follow up years were strong El Niños. Probabilistically speaking, the super El Niños of the past present a 1-in-7 statistic that two will happen in successive years.

What are the implications of two severe El Niño years in succession? Are water resource managers planning around the forecasted average impacts of climate changing, or around the extreme scenarios? There is little doubt that the South African economy, and the desire to grow it, would be dealt a severe blow were 2016/2017 to be another drought year.

But there may be even worse scenarios that should enter into the resource manager’s considerations.

Shining a light on the baobab tree

Over the short term it surely is, but when you look over longer periods there have been shifts in the rainfall regime that are much bigger than the inter-annual variability caused by El Niño. These shifts are effectively changes in the climate bands that bring our rain, and they are analogues of climate change that are likely to happen in the future.

Francois Engelbrecht and his team of scientists at the CSIR have been warning of the impacts of climate change.

His data suggests that rainfall will drop between 20% and 30% over southern Africa (although this is not uniform) and temperatures will rise.

What he presents is a future reality that is something akin the current drought condition – it will become the norm. Is it possible for South Africa’s economy to grow, or even sustain itself, applying current water management strategies in a future that looks like today’s drought?

The frightening thing that emerges from the baobab record is that these changes are not gradual, but rather punctuated by episodes of very rapid change over a few years or decades. Just a few degrees change in the temperature of the south-western Indian Ocean is enough to shift the rain-bearing cloud bands away to the east and drastically reduce the rainfall in the summer rainfall region.

At present there are a number of inter-basin water transfer schemes that are addressing the imbalance between water supply and demand. If the precedents from the past, and the forecasts for the future are taken into consideration, then the economy is vulnerable, and with it the whole concept of sustainability in resource use.

Water intensive industries such as energy generation are especially vulnerable. The Medupi power station near Lephalale makes use of water piped form the Mokolo Dam to meet it water demand.

The Mokolo Dam is faring better than most dams at 80% capacity compared with last year; a situation that is at least partially influenced by the fact that irrigation schemes using water from the Mokolo River were limited in order to supply Medupi.

In itself this illustrates the balance between the agricultural and power generating sectors.

The system is already in equilibrium in the sense that prioritising water for one sector has to be done at the cost of another. At a certain point this will reach a critical point either as the random act of inter-annual rainfall variability and El Niño, or the effects of climate change.

When this happens the burning reality as the taps run dry will be whether we did enough to ensure sustainable water-use.

From domestic behavior to leaking and aged municipal infrastructure to the efficiencies of industry:  it is essential that water be valued at the worst possible scenario. 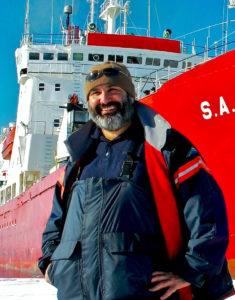 Stephan Woodborne is the senior AMS scientist at iThemba LABS. He is Assoc. Prof in the Mammal Research Institute at the University of Pretoria, and is a research associate at WITS University. He has been at the centre of past climate research in South Africa for 20 years as the head of the radiocarbon dating laboratory at the CSIR, and now at iThemba LABS. His current climate research is focused on trees and reconstructing how rainfall patterns have changed over the last 1,000 years. This dataset is feeding into the IPCC process as a test-bed for climate change models.