Diego Rodriguez shines light on the water and energy nexus

The inextricable link between water and energy is one that is too often ignored and  regarded as an unequal relationship, when in fact they both have the same right to be placed on the pedestal.  Senior Economist, of Water Global Practice, Diego Rodriguez, from The World Bank Group, explains the virtuous circle between these two essential resources. 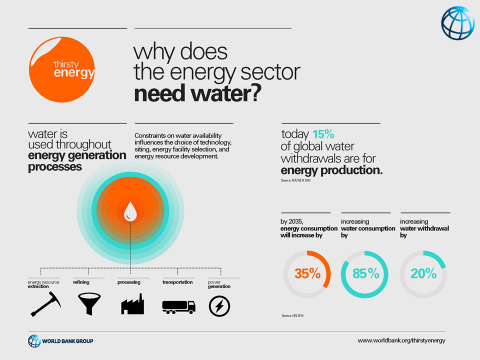 Population and economic growth, rapid urbanisation and climate change will place large and increasing demands on both energy and water resources.

Developing countries are the most vulnerable to the consequences of this increased demand. This is partly due to the lack of proper infrastructure needed to mitigate increasingly variable water supplies, and often lack the institutions and regulatory framework to manage this complexity.

Although the relationship, complementarities and synergies between water and energy are now evident, these two sectors have historically been planned, regulated and managed separately.

In recent years, much of the efforts on the water and energy nexus concentrated on the development of analytical tools for planning and on the promotion of technological innovations to promote efficiency gains across both sectors.

These aspects have a very important role in bringing solutions, however,  they must be complemented by institutional reform and policy guidance, sound planning based on robust data and information and smart investments.

In much of the nexus discussions, we don’t hear enough about  the vital role that institutions play.

As defined in economics, institutions go well beyond the organisations that shape our governments, private sector and civil society.

These constrains define the incentive structure of societies[iv].

This definition requires us to look beyond rigid organisational structures and emphasise the need to define incentive structures that promote coordination and behavioral change.

The impending development challenges require that individuals also promote codes of conduct that provide the necessary change to move from silos to coordinated and integrated approaches, from promoting top-down to bottom-up decision making, and participatory processes, that remove perverse barriers to shift from rigid to flexible systems, that remove political interference, and that assist to transition from linear to circular economies that promote resource efficiency.

None of this can be achieved without proper institutions.

Data shapes the quality of the information that is used to generate knowledge and, as such, shapes the planning, design and operation of infrastructure. In addition, it provides the tools for better decision making to governments, private sector and civil society.

Data is power, and the sharing between sectors, line ministries and key stakeholders requires the promotion of policies that promote transparency.

The lack of adequate data is limiting the capacity to provide the information and knowledge to decision makers to promote integrated solutions.

For example, in some countries it is difficult to obtain water-related data from the energy sector (such as power plant operators, mining and oil extraction facilities) as companies many not be required to report information on their water use and water discharge.

Hence, it is challenging to make credible assumptions on the water needs of the energy sector. Much of the analysis that has been conducted on the water-energy nexus has been based on global averages and assumptions that do not reflect local conditions and could be several order of magnitudes from in situ data.

There is no debate on the critical role that physical and digital infrastructure plays in an economy and in promoting social welfare.

Energy and water are highly dependent on  infrastructure and the investment needed to maintain existing systems, including the operation and maintenance, upgrading and possible expansion, are enormous.

In both energy and water, infrastructure is characterised by its long-lived nature with systems that can last for several generations.

This attribute requires infrastructure that is designed with flexibility to respond to an uncertain future, and which  avoids locking into high polluting and unsustainable paths. Maintaining existing systems and developing new ones requires vast amounts of financial resources.

The investment needs clearly exceed the financing capacity of developing countries, so there is a need to concentrate on improving the efficiency and efficacy of public transfers and subsidies. This includes  using resources (ie. proper price signal) wisely to attract private finance[v].  Energy and water planning must be integrated in order to optimise investments and avoid inefficiencies.

This includes improving operations and regulations to encourage water recycling and reduce water use and impacts in water quality.

It also includes technology development and adoption, such as cooling systems that require no water, or use of alternative water sources.

It is certain that we are facing a new normal; that the future is no longer a reflection of the past.

The nexus approach provides us with an opportunity to transition from costly, inefficient, unsustainable, rigid, linear systems to more coordinated, integrated and flexible ones that respond to the increasing development challenges that our societies face.

It is an approach that allows us to revisit new institutional roles and processes, strengthen our planning processes, ensure that our existing infrastructure is managed more efficiently and effectively, while promoting resource efficiency and the protection of the most vulnerable.

The challenge ahead, is to move towards implementation of these principles while understanding the existing rigidities of our systems.