South African minister of energy, Tina Joemat‐Pettersson, announced that the Department of Energy (DoE) will make a preliminary information memorandum on the gas-to-power programme available to the market within the 2016/17 financial year.

This, the minister explained, will lay the foundation “prior to commencing with the formal procurement process later in the year.”

The minister further outlined in her policy speech that the Port of Ngqura – adjacent to the Coega IDZ, is one of the potential ports considered for the implementation of the gas-to-power programme.

This was further emphasised following the release of the Expression of Interest on strategic partnerships for a 600MW gas-driven generation, which reached closure in June 2016.

The statement by the minister has also been echoed by the MEC for Economic Development, Environmental Affairs and Tourism in the Eastern Cape – Sakhumzi Somyo, who recently outlined the provinces approach to the gas-to-power programme.

Somyo said: “The Eastern Cape’s plan to host a gas-to-power hub is well advanced with Coega IDZ now clearly the province’s preferred location for the development.

“This pronouncement sets the scene for the Eastern Cape to ramp up its plans to become the epicentre for the hub.”

The province’s potentially ‘game-changing’ shale gas reserves, extensive oil and gas exploration opportunities off its coast, the world-class deep water Port of Ngqura, could be used to leverage gas imports and exports, as well as the conversion of the Dedisa Power Plant at Coega.

The CDC has over a period of years worked hard to locate the liquid natural gas (LNG) facilities and gas-to-power plant in the Coega IDZ and Port of Ngqura.

“The power generated by the LNG integrated Combined Cycle Gas Turbine (CCGT) plant would satisfy the bulk of the Eatern Cape’s electricity requirements, assisting with the stabilisation of electricity in the region and would create over 1,000 jobs, as well as support the manufacturing hubs of the province,” Ncemane explained.

There is advanced industrial capability in Nelson Mandela Bay and the Coega IDZ; both are also an important off-take market for the gas hub.

Furthermore, Coega is home to the DEDISA substation, which is vital infrastructure for injecting large amounts of power into the national grid.

“Coega, as the preferred site for the gas-to-power hub, has led the charge and continues to press ahead with preparations, having undertaken environmental studies for four sites which it has identified for a power plant and land-based LNG terminal, amongst others,” Ncemane added.

“It has also completed the preliminary work for a CCGT power project in the IDZ which entails the LNG facilities and gas-to-power plant.” 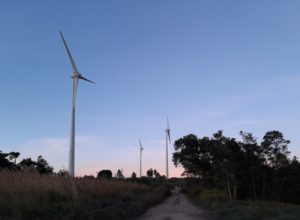