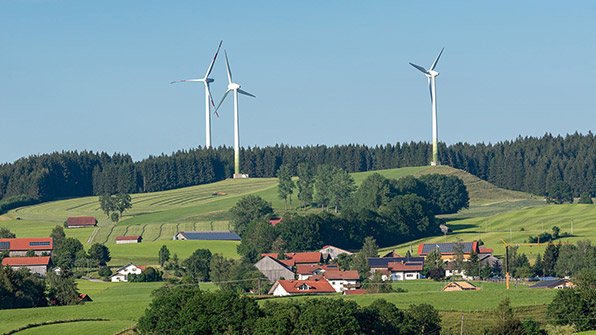 Exclusive interview with Arno Zengerle, Mayor of Wildpoldsried in Bavaria’s Allgäu, who will deliver the closing keynote address at African Utility Week on 19 May, 2016 in Cape Town.

Wildpoldsried, a Bavarian village (very rural) of about 2,600 residents is leading the way in Germany’s extraordinary renewable energy transformation. Over the past 17 years, the village has invested in a holistic range of renewable energy projects that include 4,983 kWp of photovoltaics, five biogas facilities, 11 wind turbines and a hydropower system. As a result, the village has gone beyond energy independence – and it now produces 500% more energy than it needs and profits from sales of the surplus power back to the grid.

Please tell us more about Wildpoldsried?
Wildpoldsried is a small village with 2,650 inhabitants in Bavaria in the south of Germany, close to Austria and Switzerland.

Was there a specific event that led to the process of becoming a green village?
In 1999 we started a residents’ participation process in our community. We asked the people: how would you like to live in the year 2020? What are your ideas? What is missing in our village? One issue was renewable energy and climate protection. The results showed that the residents are in favour of renewable energy. We then started several projects.

What does it entail to be a green village – are you off the grid?
At the moment Wildpoldsried produces 650% percent renewable energy (electricity). The most energy  – generated from windmills, biogas, solar – is sold to AÜW (Allgäuer Überlandwerke), the electricity supplier in our region. We are not off the grid.

But the situation, having so much renewable energy, was the start of the research projects called IRENE and IREN2. With the IREN2 research project, we are studying the operation of the microgrid as an isolated application – disconnected from the main grid.

Click here for a video about IRENE. For more about IREN2, click here:  The IREN2 research project in the smart energy village of Wildpoldsried

What process did you follow to get to the point of being a green village?
We used several options of renewable resources for the production of electricity and heating. Also we have some projects for energy saving and climate protection.

What were the challenges?
It was very important to inform residents about the projects and goals. Many problems can be avoided if residents are included and involved.

How supportive is your local and national government towards such initiatives?
Germany introduced a new feed-in tariff under the Renewable Energy Source Act of 2000 – called EEG (the Erneuerbare-Energien-Gesetz). The EEG made it economically viable for residents, small businesses and entrepreneurs to get into the renewable energy business, especially solar. But the feed-in-tariff is staggered downwards. For example: If you build a solar panel in 2004 – the energy company has to pay 54 cents (Euro) for every kWh for twenty years. Now, if you build solar, the company has to pay 12,7 cent/kWh.  So it´s better to use your own electricity and only sell the excess – It is even better to save the excess in a battery.  The municipality of Wildpoldsried pays benefits to several projects for energy saving. The municipality publishes this comprehensive information for its residents.

Any current energy projects that Wildpoldsried is involved in?
We have many projects from the residents. For example:  Over 250 households in Wildpoldsried have solar panels – the most are private, only 10 buildings are owned by the municipality.  The windmills are all owned by local companies, the municipality is only involved in the last two windmills. The municipality also has a biomass-heating-system (wood pellet and waste heat from biogas) – more than 50 houses are supplied with this heat.

What will be your message at African Utility Week in May?
Use the renewable resources, intelligent technology and be independent. The sun alone gives us more energy than all the world needs.