With great fanfare, the new cabinet entered into the energy sphere with a blast when newly appointed Minister Jeff Radebe announced that an additional 27 renewable projects would be signed off without further delay.

The good news if any, is this will bring about substantial investment and some jobs- as would almost any investment which offers 20-year government guarantees and 100% off take.

“The first part of the logic cannot be failed, but it is the consequences that we as ordinary South Africans have to live with and these promise to be dire,” says Ted Blom, a partner at Mining & Energy Advisory.

Under the current energy scenario, South Africa will have more than 60GW of capacity by 2022, against a flagging demand of below 30GW.

The primary reason demand has fallen to below 2007 levels is the massive increases in electricity costs of over 500%. This follows the basic economics rule – the more expensive the item, the lower the demand.

Basic electricity prices have ballooned from around 15cents/kWh to an average of over 100c/kWh, and in some cases to over R3.00/kWh, dependant on the demand profile.

This massive increase has created a “profit umbrella” – as Eskom’s cost of coal power is below 35c/kWh – the balance going towards a bloated headcount, corruption and inefficiency.

Outsiders seeing this, and knowing that government has taken control of a broken Eskom, are queuing at the door with energy projects that are virtually guaranteed to make money under this artificial price floor.

“The consequence of this recipe spells disaster for SA consumers and business”, forecasts Blom. “It will lead to a 20-year depression as electricity tariffs get blown sky high to compensate a dying Eskom and inflation-linked Renewables with guaranteed off-takes.”

“If the renewables had such a compelling story, Government should just have opened the grid to competition – and that would have benefitted everybody”.

“Mixing socialism and government intervention with capitalism will always result in a loose-loose situation for the consumer and workers”, Blom continues. Even NUMSA, the metalworkers union, has seen through all the noise and publicity that this is just another scam to boost votes in next years election and ignore the reality of the current supply surplus.

“We plan to take this further”, promises Blom, who was previously the Energy Director at OUTA and has since split away. The truth about the consequences of this nightmare must surface to save SA’s already embattled consumers.

Written by Ted Blom, independent energy expert and partner in Mining & Energy Advisory. He is also a featured speaker at the upcoming African Utility Week. 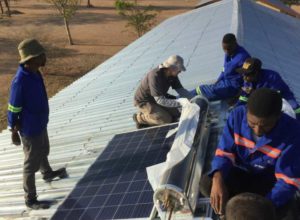 Green buildings: ‘we are building together’