Private investment key
Says the iPAD Angola director, Jose Monteiro: “the main message from the government regarding foreign investment in the country was that private investment is key to the country´s social, economic, industrial and infrastructural development.“ He continues: “the highlight of iPAD Angola was Mr. Aguinaldo Jaime’s presentation on ANIP´s restructering during which he introduced the technological investment platform which should be a reality soon.” Mr Jaime is chairman of the Restructuring Commission of ANIP, Angola’s National Private Investment Agency.

Jose Monteiro says: “other high-level government presentations that provided prospective investors with expert insight were by Mr. Kiala Gabriel, Secretary of State of Industry, Ministry of Geology, Mining and Industry of Angola who shared the latest developments in the industrialisation programme in Angola and then Ms. Teresa Muro, the National Director for Statistics, Planning and Studies in the Ministry of Transport who spoke about partnership opportunities within the transports and logistics rehabilitation programme in Angola.”

How to successfully invest in Angola
Dr. Mankenda Ambroise, Secretary of State of Geology and Mines spoke about the importance and role of the mining sector within the government programme to diversify industrial and economic development. Says Jose Monteiro: “finally, the event had a brilliant closing session with an investors’ panel on how to overcome the most common barriers to investment in Angola. This included high-level participants such as Mr. José Severino, president of AIA (Angolan Association of Industrialists), who provided delegates with invaluable insights on how to successfully invest in Angola.”

Cemented niche reputation
According to the iPAD Angola director, the 2011 event has successfully cemented the event’s reputation as a niche and highly targeted forum for private investment and business partnerships in Angola: “The majority of sponsors and exhibitors were very happy and will return next year. The 2012 event will be much more focused on networking. A couple of innovative concepts will be introduced in order to allow not only for the creation of a contact networking but also to build valuable and long lasting business relationships.” Sponsors included Barloworld, Sogester, Endiama, Transnet, Bongani, PWC, Megger, Aurecon, BFA, KPMG and the Development Bank of Southern Africa. 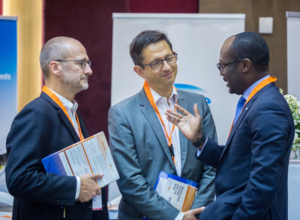 Now is the time for local investors to step up and...