Within this blog, Areti Ntaradimou, content director of European Utility Week, takes you through the conclusions drawn from key industry experts during last year’s Digitalisation conference track, and how these conclusions are helping to form this track in 2018.

The most popular Summit session was by far the Digitalisation track, which not only drew the highest attendance rate amongst delegates, but also sparked the most discussion from the industry.

Creating the Digitalisation track was exciting enough on its own, but the debates and outcomes from each of the sessions were the fundamental reason why we created the track in the first place.

The Digitalisation track was successful not only because it handled one of the hottest topics on the European agenda for the energy sector, but also because it was structured in a way that narrated the complete story in “four key sessions that together cover an innovation-to-value-creation life cycle,” according to Henrik Gothberg, director group financial systems at Vattenfall.

The first session, with the catchy title “Democratising Energy”, was chaired by the IDC Insights Research Director, Roberta Bigliani, a long-time member of the European Utility Week Advisory Committee and Brand Ambassador.

Being part of Digitalisation from the beginning of its creation, she helped develop the entire track with me. “What I am taking home from this session is the agreement reached between all participants, speakers and panellists alike, that the Democratisation and Digitalisation of Energy are happening right now, that it is a fact, but also the disagreement on how it is or should be happening. Because there were those speakers in the session who believe that it should happen by promoting and obtaining accessible sustainable energy and those who believe that giving power to the customer is the key.”

She goes on to say that stability of the system will be a main focus, but also a potential hiccup when moving towards a digitised and most likely decentralised future for Europe. “DSOs and TSOs need to work together to maintain the stability of the energy system”, says Roberta. The quality of energy that eventually arrives at the end user – both consumers, commercial and industrial “will also be affected because stability equals quality. If you do not have a reliable system to count on, then you are going to have a lot of problems from a quality perspective”.

Germany and the UK are good examples of decentralised systems in action. Ireland, with its vast amount of renewable sources, especially wind, will have to handle reliability challenges. This will make for great case studies for the programme in 2018!

The second session of the Digitalisation track was chaired by another member of the Advisory Committee of EUW 2017, Henrik Gothberg, director group financial systems at Vattenfall. A truly valued partner in the creation of the story behind the scenes for this track.

The session was titled “The Opportunity of Energy Data – Value for whom?” and the answer – or the attempt thereof – was as was expected: a complex one due to the fact that we need to put the data in context with the bigger picture in mind. “Contextual Analytics is the way forward. Data alone is important, but if you don’t put it in context, then it will not be as efficient as it could be,” says Henrik.

Another key outcome of the session was the distinction between public and private data and the balance between them. According to Henrik, you have data that can be publicly shared between utilities and other parties, and you have data that is private and/or sensitive and should be protected. “Strong regulation is needed here, of course, to protect and manage data, but on a data level, not on a system one.”

“The industry needs to be close to the European Commission and discuss “regulation” with them. Another important thing the industry needs to do is to connect with the data experts; those who have the insight and knowledge; with the European Commission in order to help develop the rules and regulations that will govern Data.” Stay tuned, as Cyber Security and Rules to Digitise Energy are certainly going to be part of the programme during EUW 2018 in Vienna next year!

‘Creating new businesses and optimising existing operations’ was the title of the third session of the Digitalisation track. It was chaired by Christian Heuer, Global Head of Pace Global Energy Business Advisory at Siemens AG.

As the Diamond Sponsor of EUW 2017, Siemens has been an invaluable partner sharing its expertise and highly acclaimed experts with us like Christian himself, in order to elevate the EUW programme. “The major agreement between all the participants in my session was that, although Digitalisation will play a very important role in the near future, it must be seen as a journey and not a project. We learn from both our successes and our mistakes as we progress on this journey”. And during this journey, I think things are going to change for everyone, from a customer perspective of course, but also from a business one.

Christian adds: “Not only DSOs and TSOs are going to play a major role in the transformation of the Energy Sector, by transforming, first of all, themselves and their services to the people. Any type of utility will need to rethink their role due to the transformation of the Energy Sector, even rather any type of player on the energy playing field.” So how are we going to achieve all of this from a business and customer perspective? Our EUW 2018 programme will be evolving this subject to look beyond the “Beyond the Meter”.

Martin Dunlea, the Utilities Industry Strategy Lead at Oracle, has been a committed and indispensable partner for European Utility Week throughout the years, both as a contributor and as part of the delegation of Oracle, Gold sponsor of EUW 2017. Given his undisputed expertise in the energy sector, I entrusted him with the chairing of the very interesting yet “tricky” final session of this year’s Digitalisation track. The title of the session was “Making Digital Transformation in Utilities a Reality”.

So what did Martin have to say about his session? “The general theme was very broad, which was reflected in the many perspectives presented on the day. From a TSOs perspective, we heard about the challenges of building a new electric and digital grid, managing the growth in distributed energy resources (DER), while complimenting the traditional TSO work. In addition, Innovation think tanks, data analytics as a contributor to realising value and how HEDNO in Greece can help provide a roadmap for the Clean Energy for All European Islands Initiative were interesting topics and all brought something to the table.”

Read more: Utility Series 1: Driving change on behalf of the consumers and the sector

There is no doubt that Digitalisation has a leading role to play in the near future and it is going to be a big challenge for everyone to fully grasp its potential. Martin concluded by stating: “The future will include data analytics to manage the technology, which will encourage the existing business models to evolve.” Perhaps we could add a more focused and intense look at island technologies, as well as the new and improved role that DSOs and TSOs have to play in a digitised world as a topic for the 2018 programme in Vienna?

Looking back at a very successful event, one could easily support the view that both the numbers of visitors interested in Digitalisation and the outcomes of the sessions mirror, in a way, the words of Roberto Viola, Director-General, DG Communications Networks, Content and Technologies, and Dominique Ristori, Director-General, DG Energy: “The transition to a smart, secure and sustainable energy system is no longer a choice for Europe; it is a responsibility towards all citizens, our future generations and the planet…This transition requires first and foremost bridging energy and digital economy.”*

Stay tuned, to find out how exactly this is going to happen! 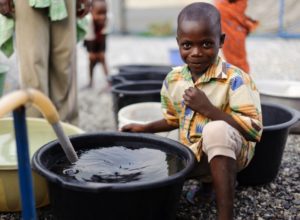